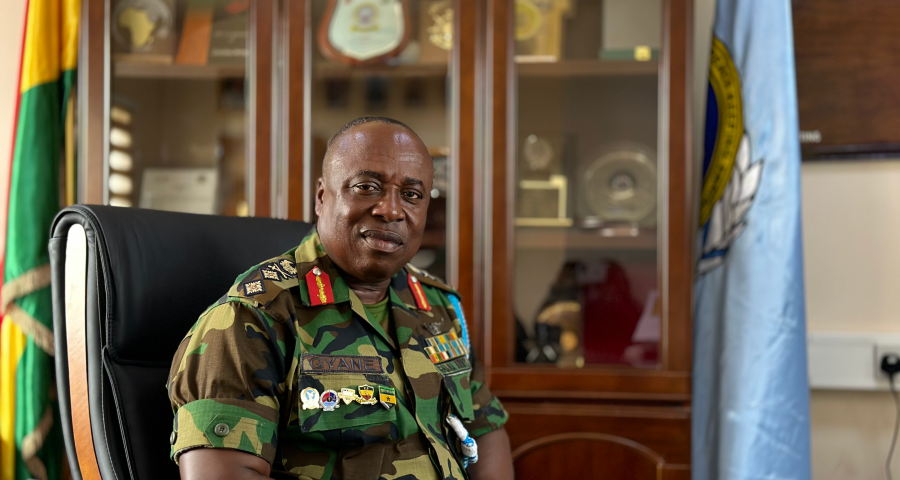 On 11th November 2022, Major General Richard Addo Gyane assumed office as the Commandant of the Kofi Annan International Peacekeeping Training Centre (KAIPTC). He took over from Major General Francis Ofori who was Commandant from 2019 – 2022.

Maj Gen Gyane attended St. Peters Secondary School, Kwatia-Kwahu in the Eastern Region of Ghana from 1977 – 1984 where he obtained both his Ordinary and Advance Level Certificates.  He was commissioned into the Electrical and Mechanical Engineering Corps of the Ghana Armed Forces as a Second Lieutenant on 14 August 1987.

Major General Gyane completed his Junior and Senior Command and Staff Courses at the Ghana Armed Forces Command and Staff College.  He holds Certificates in Equipment Support from Electrical and Mechanical Engineering Corps of the British Army, Operational Logistics Support from the UN Institute for Training and Research, and International Peace Support Operations Course from the Kofi Annan International Peacekeeping Training Centre (KAIPTC).

Major General Gyane has held several appointments in and out of Ghana.  Key among them are; Commanding Officer (CO) Base Workshop, Burma Camp, Commanding Officer (CO) Army Headquarters (Camp), Director, Army Logistics and Acting Director Army Administration.  He was also the Chief Military Personnel Officer and Chief Training Officer, both at the United Nation Mission for the Referendum of Western Sahara (MINURSO). His last appointment before his appointment as Commandant, KAIPTC was Director-General, Plans, Research and Development (DG PR&D) at the General Headquarters of the Ghana Armed Forces.  Among his principal duties as DG PR&D were; strategic planning for the Ghana Armed Forces, researching to enhance the future development of the Ghana Armed Forces, determination of the strategic disposition of the three Arms of service; Army, Navy, Air Force, budget planning and management as well as the development of policy for formation and organisation of new Units.

By way of civil qualifications, he holds a Bachelor of Science Degree in Mechanical Engineering from the Kwame Nkrumah University of Science and Technology (KNUST), an International Diploma from the Chartered Institute of Logistics and Transport (CILT).  He further holds a Master of Art Degree in International Affairs and an Executive Master Degree in Business Administration, both from University of Ghana, and a Post-Graduate Certificate in Contemporary Management from the Nobel International Business School.  He also holds Master of Applied Business Research and Doctor of Business Administration Degrees from the Swiss Business School.   He is a proud member of the Ghana Institute of Engineers (GHIE).

The General has travelled extensively  as  part of delegations from the Ministry of Defence and the Ghana Armed Forces to many countries around the world including Egypt, Israel, Azerbaijan, South Africa, the US, Germany, UK, United Arab Emirates, China, Brazil, Serbia, Republic of Korea and Turkey.

He is married with four (4) beautiful children – three (3) girls and a boy.  His hobbies include farming, playing tennis and golf. He also likes listening to highlife music.