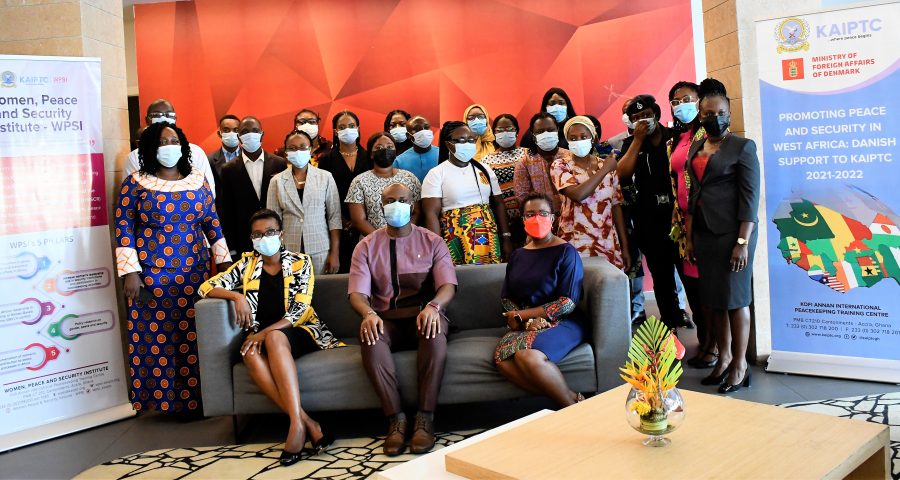 While acknowledging the efforts of some African countries, the Institute said there was still more to be done to uplift the participation of women in accordance with the United Nations Security Council Resolution on Women, Peace and Security (UNSCR 1325).

The Institute observed with concern that the hindrances affecting the involvement of women in security issues were structural and not the lack of willingness on the part of women to occupy frontline positions.

The Head of the WPSI, Mrs. Joana Osei-Tutu made the call at the opening of the Women in Peace and Security Leadership and Mentoring Course at Abidjan in Cote D’Ivoire on Monday, November 15, 2021. The training was organised by the WPSI with funding support from the Ministry of Foreign Affairs of Denmark under the project: “Promoting Peace and Security in Africa: Danish Support to KAIPTC 2021-2022”

It aimed at enhancing the leadership and mentoring capacity of operational level leaders working in the area of peace and security within the ECOWAS region as well as promoting the implementation of the Women Peace and Security Agenda in Africa.

Mrs. Osei-Tutu urged countries to review their structural policies and offer women the opportunity to contribute directly to the promotion and maintenance of peace in the region.

“I think countries have begun working and they are doing well, but I think there needs to be a continuous effort by countries in terms of consciously having more females involved. There needs to be more policy change by member states by having a conscious effort with women,” she said.

She continued by saying: “the hindrances are structural  more than the willingness of the women. So they have to look at the structures in place and make a conscious effort to remove these structures.”

Mrs. Osei-Tutu said the course formed part of a broader project that is part of the daily support that the WPSI renders to promote female leadership and influence in peace and security within the sub-region. The WPSI is a knowledge Centre for the expansion of technical capacity, training, policy, research, and analysis on women, peace and security in order to better inform the broader security agenda in Africa.

In a speech read on his behalf, the Commandant of the KAIPTC, Major General Francis Ofori underscored the need to move beyond the rhetoric and tokenism of female participation in peace processes and to create opportunities that ensure the meaningful participation of women.

“It is our hope that through this training, participants will be able to enhance their skills,leverage their power, networks and alliances, and influence decision making in the peace and security environment,” he said in a speech read by Dr. Fiifi Edu-Afful, a Senior Research Fellow and Deputy Programme Head-Peace Support Operations at the KAIPTC.

For his part, Dr. Fiifi Edu-Afful said though women play a critical role when it comes to issues of peace and security on the continent, they are usually sidelined in the peacebuilding process. He said the KAIPTC would continuously roll out initiatives aimed at building the capacities of women and influence decision making at the regional level.

The KAIPTC, in keeping with its commitment to promote the Women, Peace and Security Agenda in Africa, in 2019, established the KAIPTC Women’s Support Scheme to increase training opportunities for women and provide targeted capacity building programmes for women. Under the support scheme, the KAIPTC developed a training manual on leadership and mentoring for female leaders in the peace and security architecture.