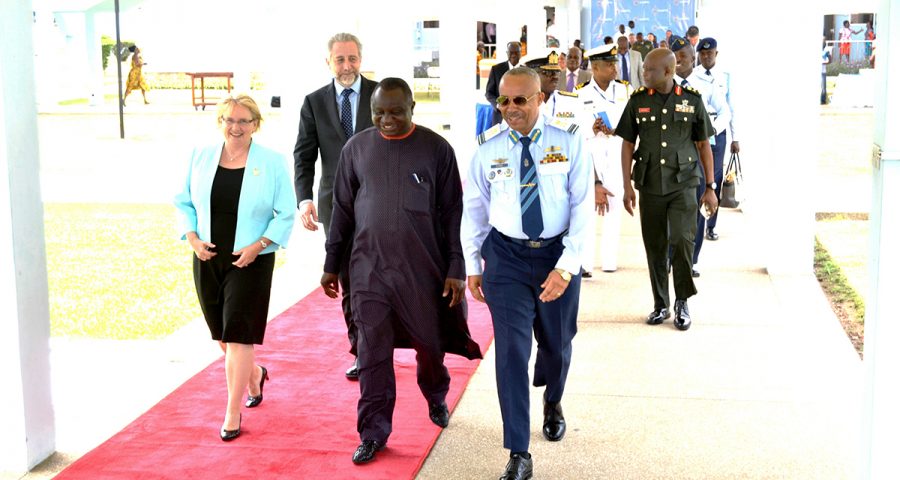 Renowned Professor of Peace and Conflict Studies at the University of Ibadan, Nigeria, Professor Isaac Olawale Albert, has charged regional bodies to deepen efforts geared towards the implementation of peacebuilding agenda globally.  He noted that peacebuilding is a multiplicity of activities that demands partnership at the governmental, inter-governmental, non-governmental levels.

He made these remarks as Guest Speaker at the 5th Annual Kofi Annan/Dag Hammarskjold lecture held at the Kofi Annan International Peacekeeping Training Centre (KAIPTC), on the theme, “Regional Engagement in Peacebuilding in Africa: Perspectives and Challenges”. It was chaired by the Canadian High Commissioner to Ghana, HE Heather Cameron.

The professor reiterated that, among others, the lack of provision of basic resources to citizens, threatens peace and often results in violent conflicts that can last for several years. He revealed that peacebuilding is for the people, and reckoned that if citizens are given their due, there would be no cause for alarm.

He called on African leaders to discharge their duties in a matured and equitable manner, especially in the management and distribution of state resources.

“There is a slight deficit in the governance system”, he said, “deficit in a sense that, our political leaders have not been able to grow up to the level of having the capacity to be able to harness our resources in a way that will benefit our countries”, he observed.

Prof Olawale, who is also a senior lecturer at the KAIPTC, outlined some critical measures suitable for the peacebuilding cause. This includes an active civil society which manifests the will and interest of the people, the drafting of good policies by state institutions, responsible citizens, and dedicated leaders who have the interest of the people at heart.

Further, Prof Olawale added that peacebuilding in Africa is donor dependent, which weakens the ownership of the projects and the process for implementing them. Thus, a collaborative effort at touching the grassroots people and a sustainable development must be achieved to prevent any unforeseen circumstance.

In conclusion, Prof Olawale disclosed that Africa, like the rest of the world should be guided by five values which are, the support to basic safety and security, political processes, provision of basic services, restoration of core government functions, and economic revitalization.

The lecture had in attendance Mr. Henrik Hammargren, Executive Director of the Dag Hammarskjold Foundation, Members of the Diplomatic Corps, and distinguished personalities from the public and private sector.

The KAIPTC and the Dag Hammarskjold Foundation (DHF), Uppsala Sweden, instituted the Annual Kofi Annan/Dag Hammarskjold (KA-DH) Lectures in honour of the two former Secretary-Generals of the United Nations.