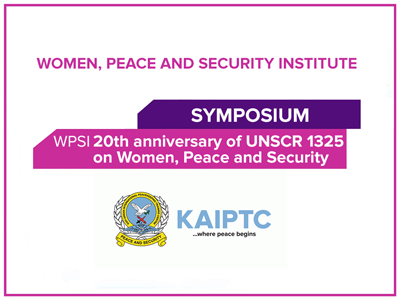 Accra, 23rd October, 2020: High-profile peace and security experts from Africa and beyond, will on October 28 2020, converge at the Kofi Annan International Peacekeeping Training Centre in Accra, Ghana, to commemorate the United Nations Security Council Resolution 1325 that reaffirmed the important role of women in the prevention and resolution of conflicts. The UNSCR1325 was adopted in October 2000 by the United Nations and specifically addresses gender-based issues.

The one-day symposium will bring together national, regional and continental experts and decision makers on the Women, Peace and Security (WPS) Agenda to interrogate the overall progress in implementing the Agenda in West Africa and the Sahel. The event will be hosted by the Women, Peace and Security Institute of KAIPTC which was established as a semi-autonomous Institute within the Centre in 2010.

It will be held on the theme; “Beyond 2020: Building Local Capacity to advance the WPS Agenda in West Africa and the Sahel”.The event is a collaboration between the 10-year-old WPSI, the United Nations Office for West Africa and the Sahel (UNOWAS), the United Nations Women (UN Women) Regional Office for Central and West Africa, the Government of Norway and GIZ. Specifically, it will provide a platform for stakeholders to, among other things, review and evaluate approaches adopted at the regional and national levels in the implementation of the agenda. There will also be an assessment of the hurdles in implementing the agenda over the past 20 years and the identification of approaches to help accelerate the Agenda beyond 2020 at the national and regional level in West Africa and the Sahel.

When the experts gather in Accra on Wednesday, top on their minds will be the need for local-level ownership, especially at the national level of the WPS agenda and as the African Union progresses with its development strategy – Agenda 2063. Agenda 2063 is Africa Union’s blueprint and master plan for transforming Africa into the global powerhouse of the future by 2063.

WPSI has been instrumental in shaping the implementation of the WPS Agenda, by collaborating with institutions including the Geneva Centre for Security Policy (GCSP), the Office of the Special Envoy on Women Peace and Security at the African Union, the Konrad Adenauer Foundation, the Ministry of Gender, Children and Social Protection to organize policy dialogues, training and sensitization programs.

Resolution 1325 recognised the experiences of women in conflict and post conflict situations, and also acknowledged the contributions and absence of women in the conflict resolution, prevention and peacebuilding process. The Resolution called on all stakeholders and actors, to ensure the mainstreaming of gender perspectives in all UN peace and security efforts. It further called for the empowerment of women, to ensure their inclusion in the prevention of conflict, and peacebuilding process.

More than a landmark, it was conceived in Africa, led by Namibia with the support of African stakeholders and eventually gathered steam in New York, where it was passed in October 2000. After 20 years in existence, peace and security experts and gender advocates around the world are celebrating the progress, lessons and threats to re-strategise and advance the full implementation of the Agenda.

Over the past two decades, the WPS agenda has chalked successes, despite the challenges that continue to persist with its implementation, and efforts are already under way to address existing challenges.

Through the implementation of the resolution, the number of women in peacekeeping operations has increased. The number of female personnel deployed in the peacekeeping service remains low. At the end of 2018, only 4% of the military components of missions were women. United Nations-led initiatives tripled the figure to 13.4% in 2019.

That is not all. Gender perspective has been integrated in peacekeeping operations; there is also an increase in preventing and responding to serious misconduct by peacekeeping personnel; and trafficking.

Africa, over the past two decades has made considerable strides in the development of instruments and policies relevant to the WPS agenda at all levels.  Primary among them at the continental level are the Protocol to the African Union Charter on Human and Peoples’ Rights on the Rights of Women in Africa (Maputo Protocol) and the Solemn Declaration on Gender Equality in Africa (SDGEA).

As at October 2019, 49 out of 55 Member States had signed the Protocol with 42 of these States ratifying it. At the regional level, various frameworks and policies have been adopted in support of the Agenda. Among the regional blocs, the Economic Community of West African States (ECOWAS) was the first to adopt a Regional Action Plan in 2010 and has already instituted mechanisms to achieve the WPS Agenda.

For further information, please contact the Women Peace and Security Institute of the Kofi Annan International Peacekeeping Training Centre (KAIPTC) on 0302-718200 ext. 1085/1087. You can find the WPSI on Facebook- @wpsi.official and on Twitter- @wpsi_kaiptc. You can further find out more about the WPSI on our website: http://wpsi.kaiptc.org/.

About the Women Peace and Security Institute:

The Women, Peace and Security Institute (WPSI) is an institute of the Kofi Annan International Peacekeeping Training Centre (KAIPTC). The Institute works to enhance the KAIPTC’s contribution to African capacity to fully implement the AU Protocol to the African Charter on the Rights of Women in Africa (Maputo Protocol) and the UN Security Council Resolution (UNSCR) 1325 and follow up resolutions on Women, Peace and Security in the context of Africa. This is achieved through building technical capacity, research, policy engagement and analysis on women, peace and security in order to better inform the broader security agenda in Africa.