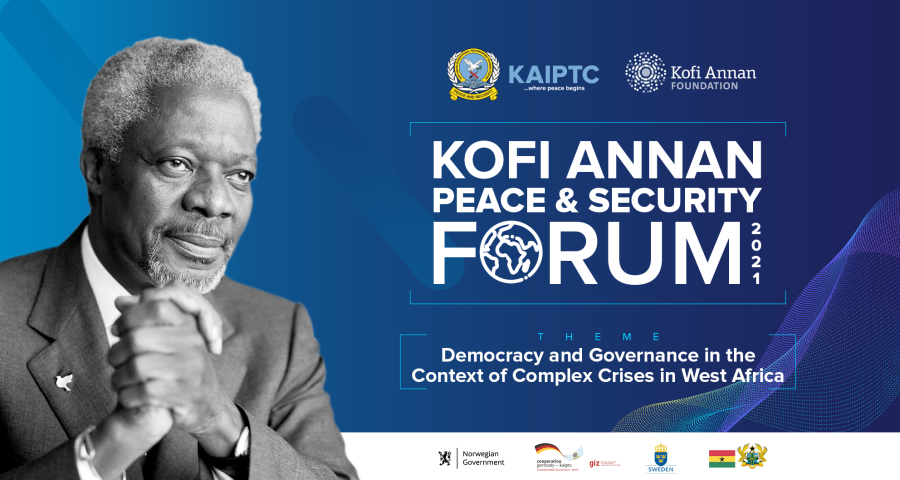 Accra, 25th November: Africa’s democracy and governance developments will be under scrutiny from December 8-9, 2021, when leaders from the continent and beyond gather at the Kofi Annan International Peacekeeping Centre (KAIPTC) in Accra for the second Kofi Annan Peace and Security Forum (KAPS Forum).

The annual event provides the platform for political leaders, diplomats, scholars and experts to dialogue and take stock of the state of democracy and governance, while addressing contemporary peace and security issues on the African continent. Organised jointly by KAIPTC and the Kofi Annan Foundation in Switzerland, it is the largest gathering of leaders from the continent in memory of the late His Excellency, Busumuru Kofi Annan, a former UN Secretary General, who was a strong advocate of peace and security across the globe. Mr. Annan, who led the United Nations from January 1997 to December 2006, had an understanding of peace founded on a holistic vision of societies, based on good governance, democracy, and human rights, especially in Africa.

The conference comes at a time when Ethiopia is embroiled in a civil war that is already having a growing regional impact, with effects felt in Sudan, Eritrea and Somalia. With the crisis escalating by the day, many fear a looming humanitarian crisis. In West and the Sahel, a milieu of military takeovers and activities of extremist groups has become a growing concern for the continent Although coups like the recent ones in Mali, Guinea and Sudan have become rare, and proscribed by ECOWAS and the African Union, the region has experienced erosion of democratic norms and principles which inversely has led to shrinking confidence in state commitment to core principles of democratic governance. The controversial constitutional changes that allowed for extension and removal of term limits for presidents amidst violence, highlights a worrying drift, and creates unhealthy precedents against the avowed conventions and protocols which set convergence criteria for good governance and democracy in the region.

According to governance experts, the democratic backsliding in African regions such as West Africa is a cause for concern, because democracy is not only an objective in itself; as Kofi Annan often told his interlocutors. Democratic governance is the political system most conducive to peace, inclusive development and the respect for human rights. Leaders in the region are already aware of the strong overlap of autocracy and conflict in Africa.

When people, especially the young, can no longer effect change through the ballot box, they are more likely to take up arms. Everything must be done to arrest the slow slide away from democratic norms, lest the region fall prey to conflict and violence once again. The civil wars that racked region in the nineties, were at least in part fueled by grievances over corruption, injustice, poverty, and political exclusion, as are the violent extremist movements that are destabilizing the Sahel region and spreading down south to the coastal countries.

This theme for the conference – ‘Democracy and Governance in the Context of Complex Crises in Africa’ – provides a great platform for the 200 expected delegates, who include former African Heads of State and high-level diplomats from governmental and intergovernmental organizations, to address pressing peace and security issues.