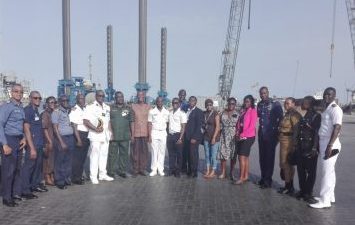 Course Fee: Cost of travel, accommodation and feeding for participants will be covered by the KAIPTC. (Sponsored by German Ministry of Defence and Ministry of Foreign Affairs)

Terms and Conditions:
Cost of travel, accommodation and feeding for participants will be covered by the KAIPTC. (Sponsored by German Ministry of Defence and Ministry of Foreign Affairs)

The Gulf of Guinea is an unbroken coastline which stretches from Cape Verde in West Africa to Angola in Central Africa. It holds huge economic potential for the fishing, shipping and maritime industries for many countries in West Africa. The recent discovery of off-shore hydrocarbon deposits in countries such as Ghana, Côte d’Ivoire, Sierra Leone, Liberia and Senegal also makes the region of great strategic importance. However, over the past ten years, the area has increasingly become a hotspot for maritime insecurity with its associated trans-national organized criminal activities.

For instance, in 2011, the Gulf of Guinea had become one of the most dangerous spots for criminal activities at sea and by 2012 it surpassed that of the Gulf of Aden as the region with the highest number of reported piracy attacks in the world. This is especially alarming as the area is the main transit hub and facilitator to the region’s rapid economic growth and also a huge hub for global energy supplies with significant quantities of petroleum products consumed in Europe, North America and Asia transiting this waterway. The Gulf of Guinea waters also attracts illegal, unregulated and/or unreported fishing with 40% of the regions estimated catch projected to be in this category. Notwithstanding all these, the latest figures from the International Maritime Bureau (IMB) in 2017 reported 180 incidents of piracy and armed robbery at sea globally, the lowest in 22 years. The report indicates that though the figures for maritime insecurity may be low, there are still areas of concern and the need for increased efforts.

The two-week Maritime Security and Transnational Organized Crime Course is designed by and conducted at the KAIPTC to expose participants to relevant and current skills, expertise and best practices in the domain maritime security and transnational organized crimes within the broader African context in general and West Africa specifically. The course facilitation team will be composed of resource persons from Training Institutions in Africa and abroad, NGOs, Peacekeeping Practitioners, as well as academia among others.

At the end of the course, participants are expected to be equipped with;

Set at the operational level, the course targets a mixed group of middle level security sector practitioners from the following:

The selection process will strive to achieve gender balance of participants as much as possible.

The course is planned to cover the following modules:

To complement the classroom work, there will also be an educational tour to the following places:

The problem-based learning approach will be used in the delivery of the ten-day residential course. Participants will play active roles in the learning process under the supervised guidance of a team of experienced facilitators. The course content will thus be delivered using a combination of tools such as; lectures, case studies, small group work exercises and simulation among others. The course will be conducted in both English and French.