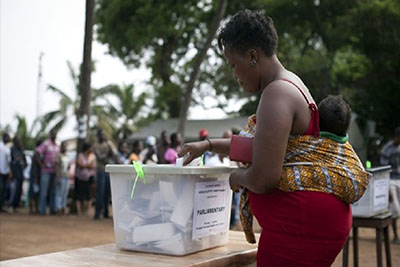 As the push for democracy and good governance continue to make inroads into many countries in the developing world, so had the need for the organizing of credible and peaceful elections in most of these countries. Democratic elections are increasingly becoming the norm, a requirement and in many cases the preferred means of facilitating representation and participation in the political process and governance. Here in West Africa, the democratic prospects though uncertain at times, still looks promising. For example the fact that countries such as Liberia, and Cote d’Ivoire have managed to emerge from years of violent conflict and evolved into fledgling democracies give reason for cautious optimism. Questions though remain as to the role of elections in furthering the democratic gains. Given the sometimes tenuous and contested outcomes of elections there remain the nagging and sometimes justifiable concerns about whether or not elections could ‘backfire’ and trigger violence or that they can actually help to navigate the seemingly ‘uncertain’ political terrain and help to consolidate democracy in the region. However, the trend in the region seems to support the fact that elections are becoming the yardstick for changing governments.

Underlying the rules governing the organization and conduct of democratic elections is the critical question of citizen participation and their role in ensuring that the process is both peaceful and effective in delivering the desired outcomes. Traditionally responsibility for the successful management of elections has rested with the Electoral Management Bodies (EMBs) because of the centrality of their role as election administrators and the implications for professionalism in running elections. As a result, efforts at enhancing the efficiency of the organization and conduct of elections have tended to target the EMBs for capacity building. This approach largely ignores the crucial issue of citizen participation and thus overlooks their role as electoral stakeholders in managing elections. The KAIPTC Election Management training course is conceived as a contribution towards filling this training gap.

The EMTC is a more recent addition to the training courses (the first issue was held in 2012). The course offers an innovative approach to how building capacity for the promotion of democracy and the conduct of effective elections is conceptualized. It offers a departure from the conventional notion of EMBs as the primary facilitators of successful elections. It takes the view that for elections, the foundation for democracy, to be successfully institutionalized, training must target all the identifiable stakeholders within the ‘electoral population’.

This approach is premised on the idea that as a process, elections are both technical and socio-political. It is therefore important that any training program aimed at enhancing capacity for effectively managing the process should target not just the EMBs. It must of necessity include all other actors with a role and stakes in the process. This will help foster citizen engagement and participation in ensuring that the process is both credible and peaceful. Such training will contribute to exposing citizens to the critical issues that underpin elections and their implications for the effectiveness and credibility of the process. The course is therefore specifically designed for the benefit of the broad range of civil society actors, electoral security personnel, government organs, political parties, election observer groups, regional economic communities and national/international NGOs as well as the traditional EMBs.

The primary goal is to provide a comprehensive election management course within the framework of peace and security from an African perspective. The objective of the training is to enhance the capacities of electoral stakeholders in understanding and managing elections. The overall purpose will be to help participants increase their knowledge and understanding of such critical issues as the legal framework for elections, electoral systems and processes as well as electoral operations.

In order to help enhance participants’ knowledge and skills in the application of best practices in election management, the training will span the broad categories of Knowledge, Skills and Attitudes. Specific areas to be covered include among others:

As noted above, the course is designed not just for the benefit of the EMBs, but for all the diverse stakeholders with high stakes in the electoral process. These include:

As part of the civilian component of peace support operations, this course could serve to further enhance the contribution of civilians to peace operations in the West African region and beyond. The uniqueness of the course derives from its ability to mainstream the issues of conflict into the modules by clearly articulating the interface between the electoral cycle/process and conflict prevention or escalation. The course will thus contribute to providing participants with the tools/skills necessary for identifying and preventing election related violence.

Applicants will be selected by a selection team using the following