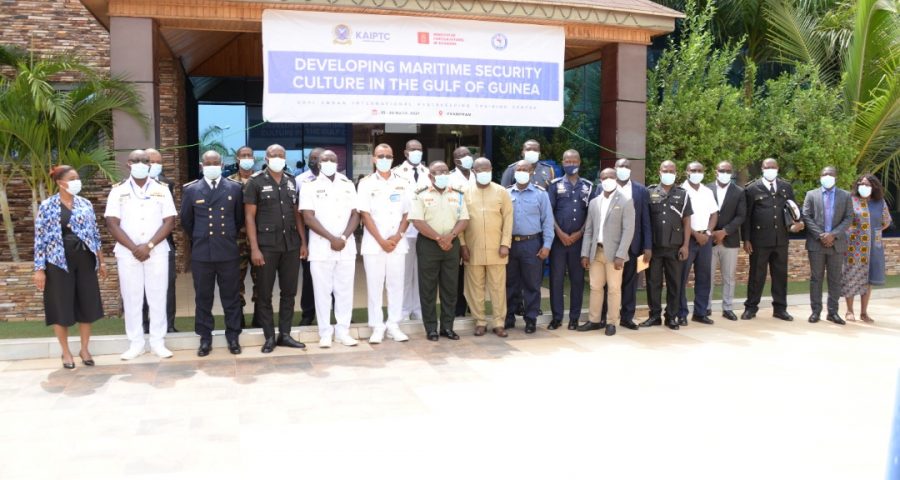 The course is expected to run until March 24, 2021, and is organised in collaboration with the Government of Denmark.

In the first half of 2020 alone, the International Maritime Bureau’s Piracy Reporting Centre (PRC) recorded 98 incidents of piracy and armed robbery, up from 78 in 2019. These crimes include piracy, armed robbery at sea, kidnapping for ransom, illegal fishing and hijackings among others. Despite the implementation of a number of initiatives from Gulf of Guinea states to enhance security, series of factors contribute to weakening the national and regional response to maritime security threats in the GoG.

In his welcome address at the opening of the course, Prof. Emmanuel Kwesi Aning, the Director of Faculty of Academic Affairs & Research at the KAIPTC, noted that the increase in maritime crimes along the GoG has made it a necessity for countries in the region to immediately develop a Maritime security culture. Prof. Aning further noted that the KAIPTC is keen on providing the necessary platforms for countries to collaborate and share intelligence and information to safeguard the security of the region.

Giving his address, the Commandant of KAIPTC, Major General Francis Ofori shared that the crimes recorded on the GoG are worrying and needs to be urgently resolved.

He said in a bid to tackle the menace, there is the need for increased and shared intelligence, information exchange, coordination between vessels, and among reporting and response agencies in the GoG region, and stressed the need to have a shared maritime security culture in all the GoG states.

Major General Francis Ofori continued that it is the hope of the KAIPTC that through the training course, the capacities of key actors in maritime security will be strengthened so that there will be a joint response in combating maritime insecurity in the GoG.

The Commandant concluded, “We are grateful to our partners, the Government of Denmark and the Inter-Regional Coordinating Centre (ICC) for their continuous support in this endeavor.”

Delivering a keynote address, the Danish Ambassador to Ghana, Mr. Tom Nørring condemned activities of pirates and the crimes being committed in the GoG,

While underscoring the importance of the eight-day course, H.E. said ensuring maritime security in the Gulf of Guinea is necessary, as it will enhance economic growth for the region with the vast majority of trade going by sea.

The Danish Ambassador to Ghana said he is optimistic after the course, participants will have needed knowledge to boost maritime security when they return to their states of operation.

“I am confident that the knowledge you will acquire through the training will improve the important role you are playing in your various capacities to support maritime security initiatives both at the regional and the national level. This I believe will go a long way to contribute to improved and sustainable security in the Gulf of Guinea waters,” H.E. Tom Nørring told participants.

Going on to acknowledge the efforts by KAIPTC to contribute to the implementation of the Yaoundé Code of conduct through training, research and policy dialogue to promote maritime security in the Gulf of Guinea region, H.E. Tom Nørring further indicated that the Government of Denmark is committed to supporting the agenda of enhancing maritime security in West Africa through its Danish Maritime Security for the Gulf of Guinea.

The course is the third in the capacity building outputs of the project undertaken by the KAIPTC with the Government of Denmark. The pilot course was held at Takoradi, Ghana in October, 2020.

The second course took place in Cotonou in Benin in November, 2020 and built the capacities of 54 personnel from relevant agencies.

Throughout the course, participants will be exposed to current knowledge on maritime security in the GoG. The course has been designed with inputs from maritime security experts in the sub-region and reflects the most current realities on the ground.