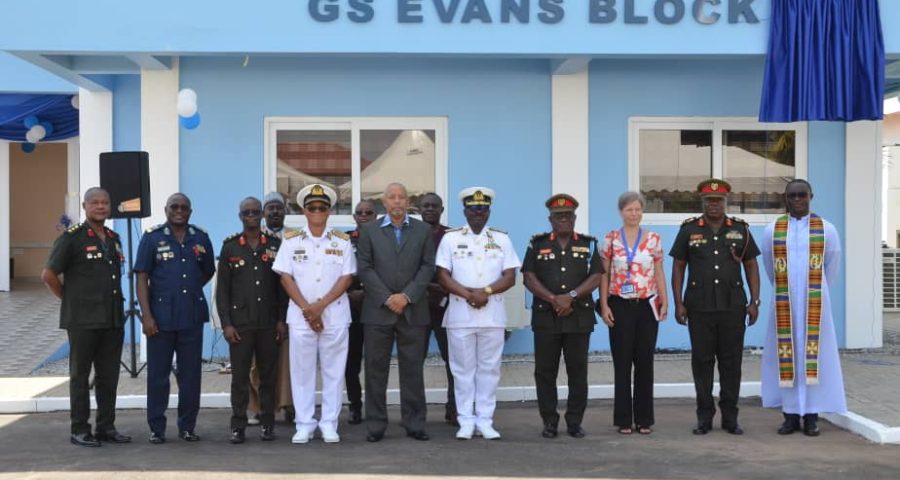 The Kofi Annan International Peacekeeping Training (KAIPTC) has commissioned a new block in honour of its immediate past Commandant, Air Vice Marshal (AVM) Griffiths Santrofi Evans (Rtd) for his exemplary leadership during his tenure (2017 – 2019) and for initiating the construction of the building. Named the ‘GS Evans Block’, the building will accommodate the Design and Production Unit (DPU), the Language Centre, the Business Development Unit, and would serve as sleeping quarters for the Centre’s armed guard. The Guest of Honour for the occasion was the Chief of the Defence Staff (CDS) of the Ghana Armed Forces, Vice Admiral Seth Amoama, and AVM Evans (Rtd), the honoree, was the Special Guest.

Maj Gen Francis Ofori, the Commandant of the Centre in his welcome address noted that, given the Centre’s mandate to capacitate military, police and civilian personnel with the requisite skills and competencies for multidimensional peacekeeping and peace support operations in Africa, the institution plays a pivotal role in peace and security in Africa.

He noted that in pursuit of Pillar 2 of the Centre’s Strategic Plan, which is to ‘ensure financial sustainability’,  a seed was sown in the mind of the immediate past Commandant to provide befitting office spaces for some of the critical units such as the DPU and the Language Unit, who support delivery of courses at the Centre. The intention, he added, was to have in-house interpreters and translators and at the same time, position the DPU to expand their operations to full commercial capacity to deliver products and services externally, as a move to diversify the sources of internally generated funds (IGF) for the Centre.

He noted that the Centre mainly delivers training in the English and French Languages. With enrolment of participants from the Northern part of the continent in the courses, the medium to long-term plan is to add Arabic to the languages for course delivery. Thus, with the establishment of the Language Unit, the Centre is expanding access to participants from non-English speaking countries, which in turn will enhance and deepen the international image of the Centre and strengthen the confidence reposed in its training packages by ECOWAS and the AU. He gave special recognition to the CDS for donating funds towards furnishing for the facility. He also acknowledged GIZ for the diverse and significant contributions towards the project.

The CDS, Vice Admiral Seth Amoama, expressed his exceptional delight at the Centre’s initiative to use its IGF to fund the building. According to him, though the building was not completed at the expiration of the tenure of AVM Griffiths Evans, the seed had been sown for the creation of a multi-purpose structure to advance the cause of the Centre and enhance its operational effectiveness. He commended Gen Francis Ofori for completing the structure, despite the numerous constraints encountered.  The Centre, he said, could now boast of office space for the DPU, the Language Unit and accommodation for troops who perform guard duties at the Centre.  He cautioned the users of the facility to accord it the greatest care and attention, and that doing so would demonstrate to AVM Evans that the Centre truly appreciates him and the edifice he helped to build.

Maj Gen Ofori and the CDS unveiled the plaque for the building, accompanied by Maj Gen Gyane, Rear Admiral Beick Baffour and other guests, whiles AVM Evans unveiled the signage of the building that bore his name.

In a brief but profound speech, AVM Evans (Rtd) noted that the occasion was a day of remembrance for him, recounting his 40-year service to the Ghana Air Force, which ended at KAIPTC. He said that “it is a man’s greatest dreams and ambitions to be invited to his last place of work to be honored”. He indicated that although he was enjoying the honor, it was the Directors and staff who helped to conceptualize and operationalize the project. The honor, he said, was for them as well. He noted that for the Centre to stand out amidst the teeming competition, it was his belief at the time that the institution could maintain a unique stature if the research and knowledge products could be packaged for easy access by peace and security actors and stakeholders. With his ideation now fruitful, he was hopeful that the block would continue to produce and publish the Centre’s publications to maintain the Centre’s leadership role in peace and security in the region. He urged all staff to work within the framework of teamwork to enable the Centre to grow and achieve its vision.