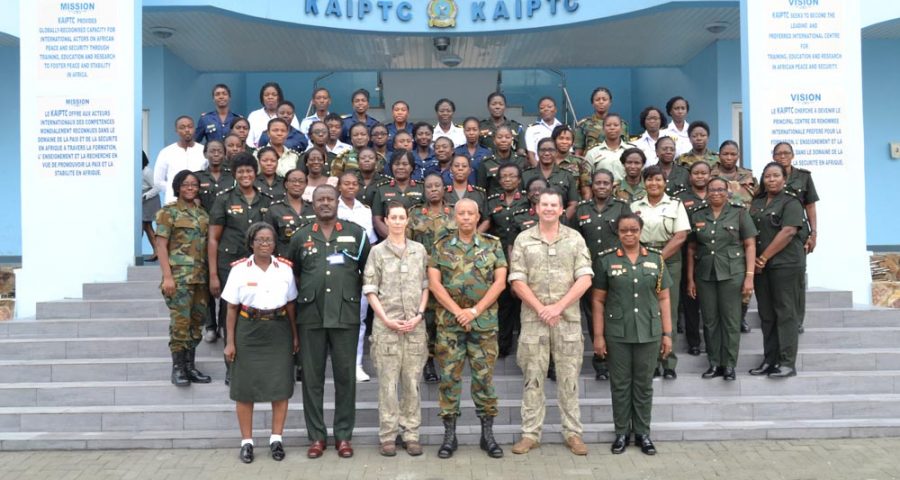 Accra, November 24, 2017: The passage of United Nations Security Council Resolution 1325 in 2000, was among others, aimed at improving the participation of women in peacebuilding, and the prevention of conflict through addressing conflict-related sexual violence.

Though there has been some fruitful global efforts towards its achievement, a review by the UN in 2015 pinpointed some challenges; addressing them requires continuous multi-stakeholder collaboration at all levels. In this light, the Kofi Annan International Peacekeeping Training Centre (KAIPTC) and the New Zealand Defense Force have been partnering to strengthen the capacity of Ghanaian female security personnel in various facets of their work.

This year, 70 personnel selected from the Ghana Army, Ghana Air Force, Ghana Navy and the Ghana Police Service took part in a one-day workshop on Gender, Women Leadership in Peace Operations. The workshop highlighted experiences of Female Commanders in UN Peace Operations as well as the roles of females in Peace and Security operations when assigned leadership positions.  The workshop also examined operational efficiencies and lessons learnt from peace missions.

During the ceremony held to officially open the workshop, Air Vice Marshal Griffiths Evans, Commandant of KAIPTC observed that “the presence of women in peace and security improves the outcomes of peacekeeping missions. It has also been established by the UN that women inclusive peacekeeping missions is more effective, accelerates economic recovery, and contributes to the conclusion of peace talks”.

He added that; “Commanders on the ground have recognized that women peacekeepers broaden the range of skills and capacities among all categories of personnel, enhance the operational effectiveness of all tasks, and improve the mission’s image, accessibility and credibility among the local population”.

Lieutenant Colonel Melanie Childs from the New Zealand Army, in her opening address, stated that the workshop was focused on learning lessons from the past and how it could be used to improve the current situation and the future of women’s participation in UN peace operations.

At the end of the workshop, the Commandant in his closing remarks, noted that KAIPTC with continue its collaboration with  the New Zealand Defense Force and other institutions   to strive for the realization of the UN Security Council Resolution 1325 in Ghana and the continent at large. In her final words, Colonel Childs encouraged the personnel to help shape the current systems, especially for the generations yet to join the armed forces.