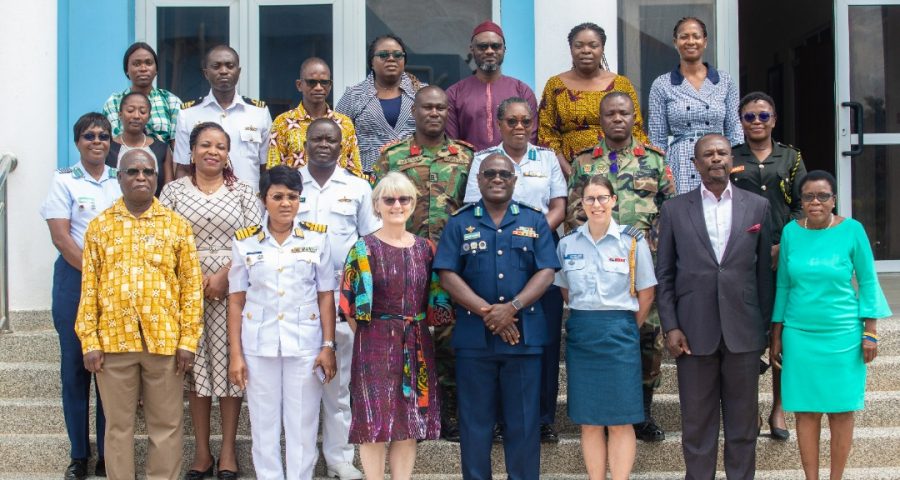 Global Affairs Canada has provided funding to the Kofi Annan International Peacekeeping Training Centre (KAIPTC) for the implementation of an 18-month project aimed at addressing barriers to women in peacekeeping operations.

The Project, dubbed: “Enhancing Ghana Armed Forces (GAF) capabilities to address barriers to Women in Peacekeeping” was informed by the recommendations of the 2020 Measuring Opportunities for Women in Peace Operations (MOWIP) Report.

The Report, which assessed the Ghana Armed Forces’ (GAF) ability to deploy women to, and ensure their meaningful participation in United Nations (UN) peace operations, identified eligible pool, gender roles, and social exclusion as top barriers to women’s meaningful participation in UN peace operations. It recommended, among others, the development of specific policy interventions to address various issues impeding women’s eligibility as well as the implementation of training and professional development programmes to advance the skills and capacities of women in the GAF. 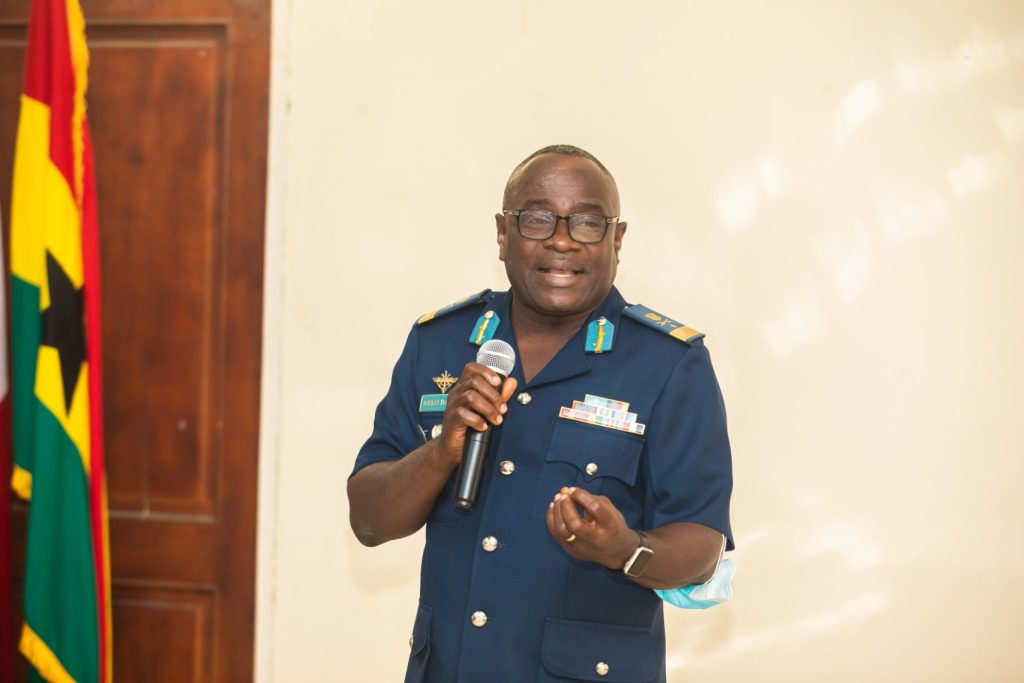 The GAF was the first military institutions in the world to complete a MOWIP assessment as part of the development of this ground-breaking, comprehensive methodology for the Elsie Initiative for Women in Peace Operations.

The KAIPTC, which undertook the data collection for the GAF’s MOWIP Report, is implementing the new Project to support GAF in implementing the report’s recommendations. The project’s estimated cost is $1,525,058 (CAD).

This project will build the institutional capacity of the GAF to address the challenges that impede the deployment of women to UN peace operations. This will be done primarily through gender sensitisation, policy development, curriculum development, and training. The curriculum development will begin with engaging identified training institutions in the GAF to review their course offerings and develop a gender-training curriculum.  Training of Trainers (ToT) sessions would be held for course instructors, gender advisors and other identified groups at the various training schools and Units/Commands to equip them to deliver the new material optimally. The ToT’s will ensure that GAF owns the new course packages in order to systemize and mainstream gender throughout the institution after the project cycle ends.

One of the first major activities is a tour of GAF’s seven (7) garrisons. The purpose of the tour is to;

With support from KAIPTC, GAF will also furnish selected offices of appointed Gender Advisors and Gender Focal Points with office equipment to enable them undertake their day-to-day functions/roles effectively. The project will also develop four (4) packages of standardized gender training and an online course for Gender Advisors / Focal Points, with the goal to strengthen their capacities to fulfil their mandate within the GAF.

The project will also provide the GAF with a software for its operational database to monitor deployments, in pursuit of the goal of the project to address the barriers women encounter in peacekeeping, and ultimately increase their numbers in peacekeeping missions. 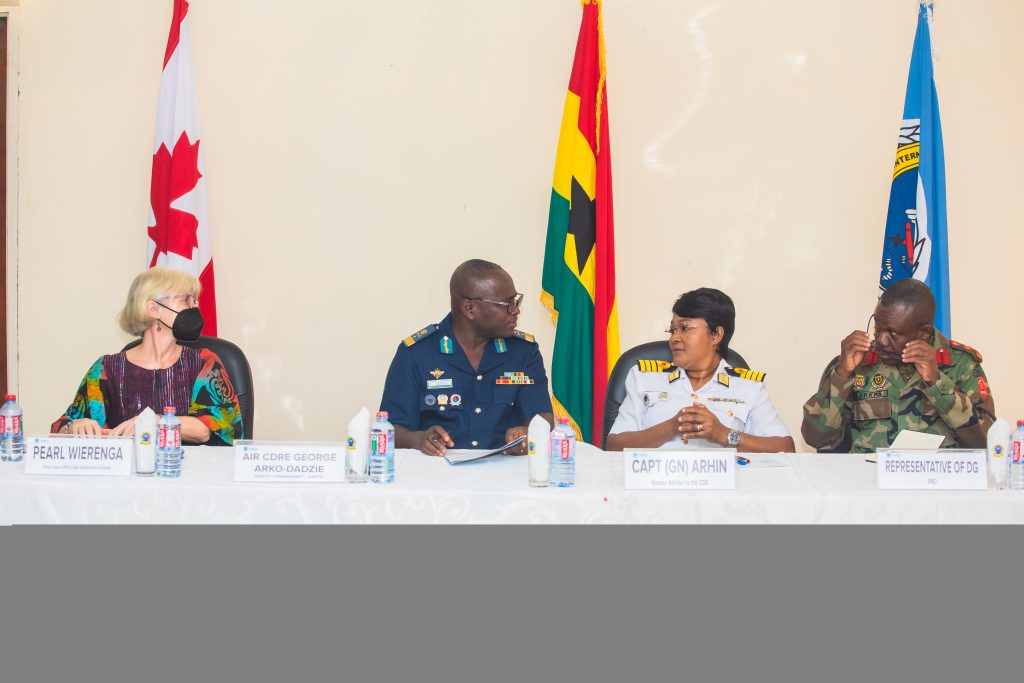 As part of the Project implementation plan, a pre-planning meeting was organised at the Centre to brief relevant stakeholders about the Project and solicit input. Major General Francis Ofori, Commandant of the KAIPTC, in a speech read on his behalf by Air Commodore George Arko-Dadzie, Deputy Commandant, KAIPTC, described the Project as timely, saying it would help GAF to promote female participation in peacekeeping globally. He said the initiative would also offer an opportunity to the GAF to address systemic challenges and develop policies for the growth and protection of the rights of uniformed women within the GAF.

While acknowledging the support of Global Affairs Canada, Maj. Gen. Ofori said the KAIPTC, since its establishment, has supported the GAF in addressing the training needs of its forces.

“The contribution of uniformed women to peacekeeping cannot be over emphasized – their aptness in identifying the needs of the communities we serve on missions and their skills and professionalism which enhances mission success,” he said.

Ms Pearl Wierenga, Global Affairs Canada’s Senior Liaison Officer for the Elsie Initiative in Ghana, provided an overview of the Initiative, which includes research (e.g., development of the MOWIP methodology), advocacy, and partnerships with Troop and Police Contributing Countries to increase the meaningful participation of military and police women in UN peace operations. Canada’s technical assistance and training partnership with the Ghana Armed Forces will be implemented through the project with KAIPTC, in collaboration with the Canadian Armed Forces. 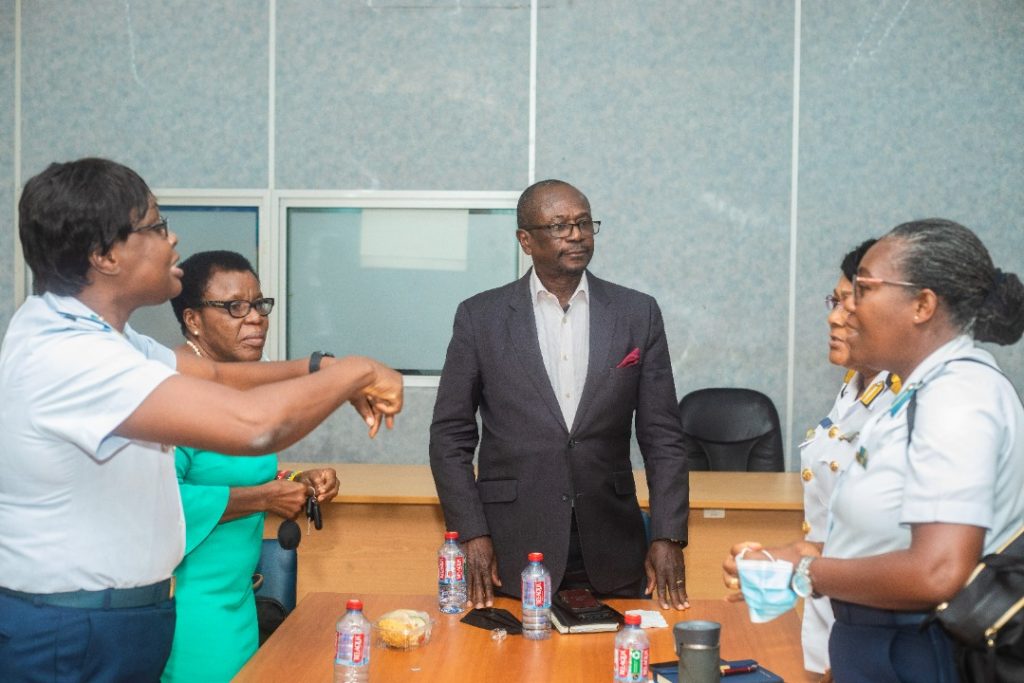 Group Naval Captain Veronica Arhin, the Gender Policy Adviser to the Chief of the Defence Staff, said the Military High Command was “fully on board” as far as gender mainstreaming of the GAF was concerned.

“The effort of the Military High command is on course and must be applauded…this platform will offer us further insight as to what ELSIE initiative is all about, the findings of the Report and the way forward,” she said.

Ghana is the 7th highest contributor to United Nations peacekeeping, currently deploying 2,760 uniformed personnel, among which 15.6 per cent are women. IIt is also one of the largest contributors of troops to UN peace operations and contributes the most women peacekeepers (2,323 as of April 30, 2022) – 14.51% of its troops, exceeding the UN gender parity target of 9% women for 2022.