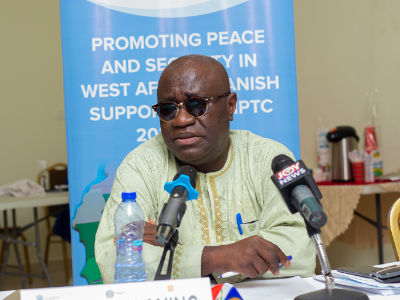 “Some of the explosive devices found in Mali, Guinea and elsewhere have some markings that can be traced home [Ghana]. We have a small arms problem to deal with,” he said, as he rallied a holistic approach to dealing with the circulation of documented and undocumented weapons in the turbulent West Africa sub-region.

With Ghana among the destination for arms from conflict zones in the Sahel, Prof Aning observed that there was the need for the country to be equally worried about small arms produced in the country.

“We need to respond to the small arms challenges carefully. First relate to understanding and having a better grasp of where the guns are manufactured in Ghana illegally.  Second relates to the import of these guns into this country. The third relates to the leakages in the stockpile we have and also particularly from the mining companies.

“What that means is that as a country, we need to ask ourselves some really difficult questions.  If criminals get access to all types of guns including military grade guns, then it means Ghana has created a fertile ground both for the acquisition of the necessary tools for violent attacks and also for resupply and supply networks,” he explained.

The security expert was speaking at the opening ceremony of a workshop on ‘Vulnerabilities and Resilience in Peace Infrastructures in West Africa at Cape Coast in the Central Region.

The event brought together key players involved in peacebuilding in Ghana to discuss how to build resilient structures that can promote peace and security in the sub-region. 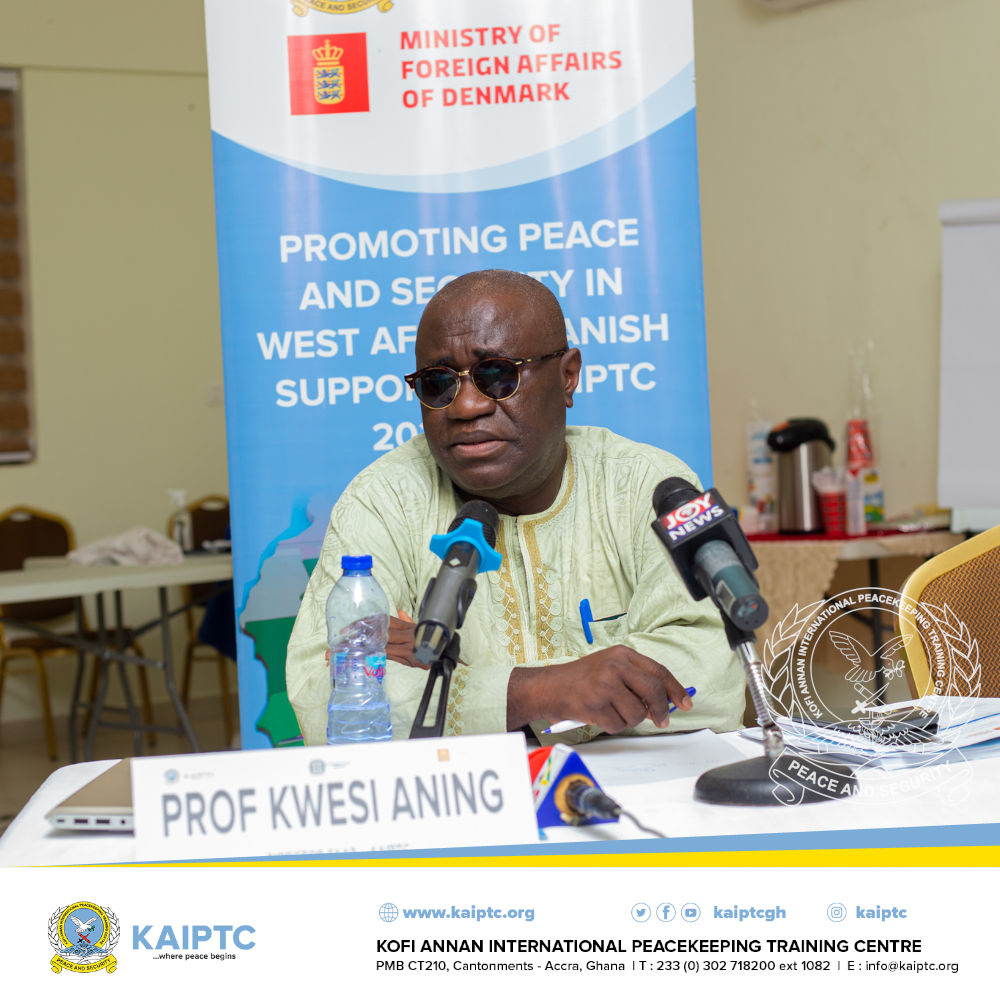 Statistics from Ghana’s National Small Arms Commission indicates that there are more than 1.2 million unregistered firearms and light weapons in circulation in Ghana. This is apart from the millions of sophisticated weapons imported into the country by criminal gangs through unapproved channels.

Prof Aning believes it would take intelligence on the ringleaders who make the guns available, where they are located, how they get the guns among others to deal with the problem which continuous to create instability in the sub-region.

When he took his turn, the Commandant of the KAIPTC, Maj Gen Francis Ofori, said there was no doubt that creating the necessary national structures was an important first step towards effective conflict prevention. 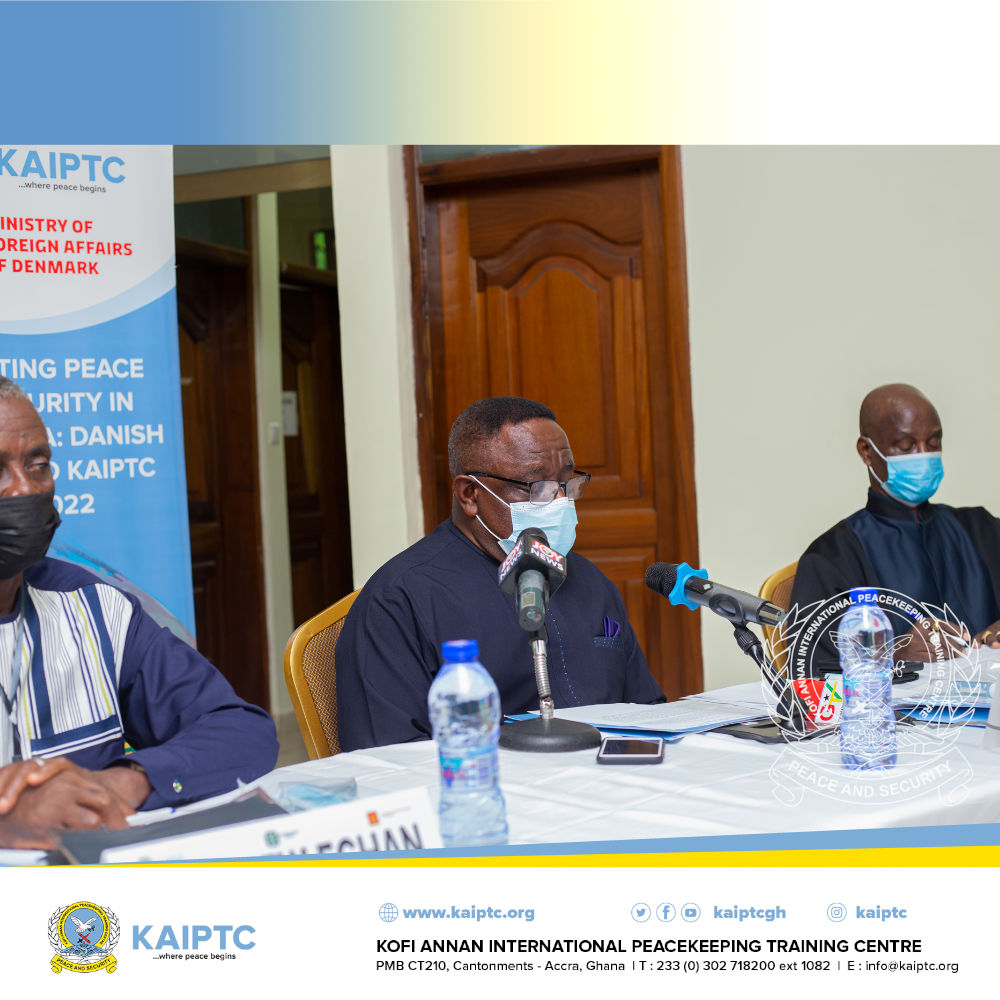 Making a case for proactive rather than reactionary approach to peace and security, he said:

“We often wait too long for violent conflicts to erupt before attempting to respond. This has proven to be costly and detrimental in both human and material terms. It is, therefore, incumbent upon us all to play our part in this process if we are to achieve the objective of building national institutions, resources, and skills to resolve conflicts and sustain peace within our societies.

West Africa has been embroiled in turbulence including violent extremist groups, unconstitutional changes in government, serious governance deficits and contentious electoral contestations, inter-ethnic tensions between nomadic farmers and pastoralists, maritime insecurity, as well as rapid population growth which have had economic, social and political strains on West African countries. Added to the tall list is the COVID-19 pandemic which has turned the world on its head.

In an attempt to respond to these challenges, ECOWAS introduced a number of initiatives. Key among these is the adoption of the 1999 Protocol on the Mechanism for Conflict Prevention, Management, Resolution, Peacekeeping and Security, and its 2001 Supplementary Protocol on Democracy and Good Governance.

To further support the Mechanism, the ECOWAS Conflict Prevention Framework (ECPF) was promulgated by the Mediation and Security Council (MSC) in January 2008, with a plan of action to drive the 14 components of the Framework which was launched in January 2019. Subsequent to the adoption of the ECPF, several regional consultations were held in order to garner support for the creation of national infrastructures for peace (I4P).

For example, in September 2013, a meeting was jointly organised by the ECOWAS Commission, the African Union Commission (AUC) and other partners such as the United Nations Development Programme (UNDP) with the support of the government of Ghana. These partners sought to explore the feasibility and modalities for establishing and strengthening national infrastructures for peace in West Africa. The meeting culminated in the Accra Declaration of 10 September 2013 on ‘Strengthening National, Regional and Continental Co-ordination Towards Building National Peace Infrastructure for Conflict Prevention’. ECOWAS member states were called upon to develop nationally-owned and nationally-led infrastructure for peace (I4P) within the next three years.

Eight years down the lane, attempts at the establishment of national infrastructure for peace by member states have produced uneven results. While countries such as Cote d’Ivoire and Sierra Leone have developed structures for the implementation of the I4Ps, other countries such as the Gambia and Senegal are yet to take definitive steps towards the establishment of nationally-owned infrastructure for peace.

Major General Ofori said these developments informed the KAIPTC’s partnership with the Government of Denmark (development partner) for which it undertook a four-country study in Sierra Leone, the Gambia, Cote d’Ivoire and Senegal between March and April this year. This was to ascertain the level of implementation of structures and mechanisms for conflict prevention and peacebuilding, and to identify gaps and opportunities that can be leveraged upon in building resilience at the country level.

He revealed that a similar study would be undertaken in Ghana to complement the efforts of the National Peace Council.

He commended the Regional Peace Councils and the various Regional Security Councils for their contribution towards peace and security in the regions.

“These efforts have to be strengthened in order to sustain the peace we all enjoy in the country,” he added.

He also commended the Danish Embassy for being a strong partner of the KAIPTC.

The Danish Ambassador to Ghana, His Excellency Tom Norring, who applauded the partnership with KAIPTC noted that working in silos would not help in tackling the worsening insecurity in West Africa. He, therefore, recommended the development of strong cooperation between the different countries on the coast of West Africa and in the region.

“Securing peace is highly dependent on national frameworks. Mali and Guinea have been victims of military coups partly fueled by unaddressed needs in their respective populations.

On the importance of peace architecture, he said its efficacy had been demonstrated in Ghana where “the [National] Peace Council is able to engage early to diffuse tense situations which could have degenerated into election violence. It is a critical element in the Ghanaian national peace infrastructure.”

Ambassador Norring reciprocated the kind words from the Commandant of KAIPTC stating that “the KAIPTC proves time and again why it is an institution that is playing a central role in the peace and stability of the region.”

Over the years, Ghana’s National Peace Council has received plaudits for its work which had often doused flames of tension threatening to consume the country’s peace and security. It is credited with working in the background since the 2008 elections to allow cool heads to prevail during the country’s post-election agitations.

That achievement was not lost on the Chairman of the Central Regional Peace Council when he addressed participants at the workshop.

“Infrastructure for peace should not mean a rigid structure but a process that leads to sustainable peace. A peace infrastructure should be a platform that is responsive to day-to-day issues that arise in the ebb and flow of conflict while it sustains a clear vision of the longer-term change needed to sustain development”. 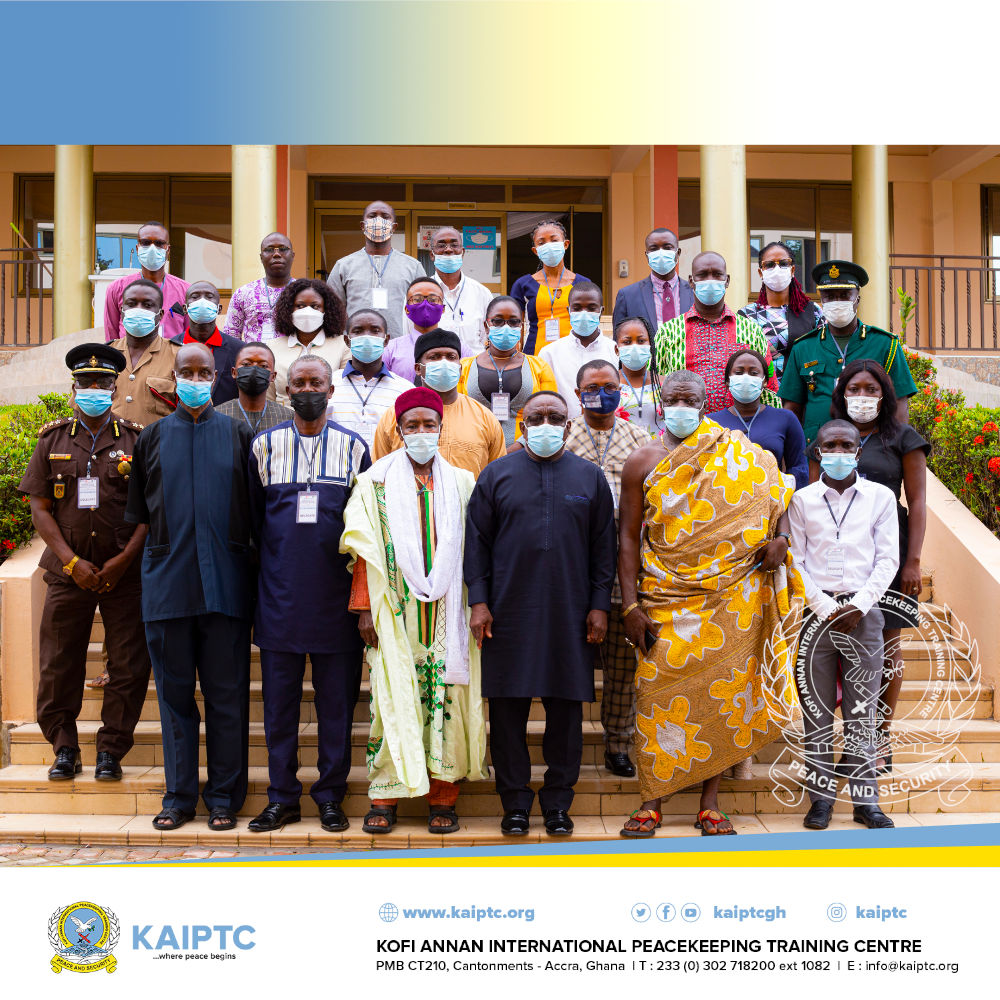