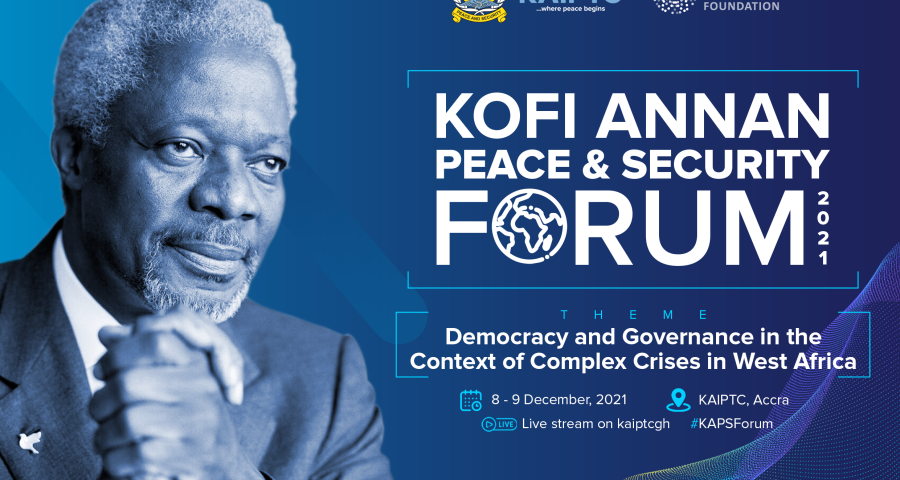 ADOPTED AT THE SECOND EDITION OF THE KOFI ANNAN PEACE AND SECURITY FORUM ON THE THEME: ‘DEMOCRACY AND GOVERNANCE IN THE CONTEXT OF COMPLEX CRISES IN WEST AFRICA’, HELD IN ACCRA, GHANA ON 8TH AND 9TH DECEMBER 2021

1. Preamble
Under the leadership of the President of the Republic of Ghana, the Commander-in-Chief of the Ghana Armed Forces, and the Chairman of the Authority of Economic Community of West African States (ECOWAS) Heads of State and Government, His Excellency (H.E.) Nana Addo Dankwa Akufo-Addo; and under the Chairmanship of the ECOWAS Special Envoy to Guinea, H.E. Dr. Mohamed Ibn Chambas; the Kofi Annan International Peacekeeping Training Centre (KAIPTC) and Kofi Annan Foundation held the second edition of the Kofi Annan Peace and Security Forum (hereafter, KAPS Forum) on the theme: ‘Democracy and Governance in the Context of Complex Crises in West Africa’, on 8th and 9th December 2021, in collaboration with the Federal Government of Germany, the Kingdom of Norway, and the Kingdom of Sweden.

2. Development of the Communiqué
The final communiqué is based on deliberations and conclusions at the KAPS Forum relating to the ECOWAS Supplementary Protocol on Democracy and Good Governance (hereafter, the Protocol) adopted in 2001. The following sub-themes were discussed either at plenary or in small-group sessions; namely—: Background, Expectations and Significance of the ECOWAS Protocol on Democracy and Good Governance; Democratic Backsliding in West Africa; Good Governance and Democratic Consolidation in War-to-Peace and Democratic Transitions; Entrenching Constitutionalism; Ensuring Free and Fair Elections; Challenges and Prospects of Balancing Democracy with Countering Violent Extremism; Challenges, Prospects and Lessons with respect to Deepening Democracy in an Age of Pandemic; Youth and Women Participation in Democracy; Electoral Integrity in the Digital Age; and Role and Ethics of Election Monitoring and Observation.

3. The Communiqué
Delegates made the following observations and recommendations during the KAPS Forum:

The following recommendations were offered for consideration:

MR. ELHADJ AS SY
Chairman of the Board, Kofi Annan Foundation