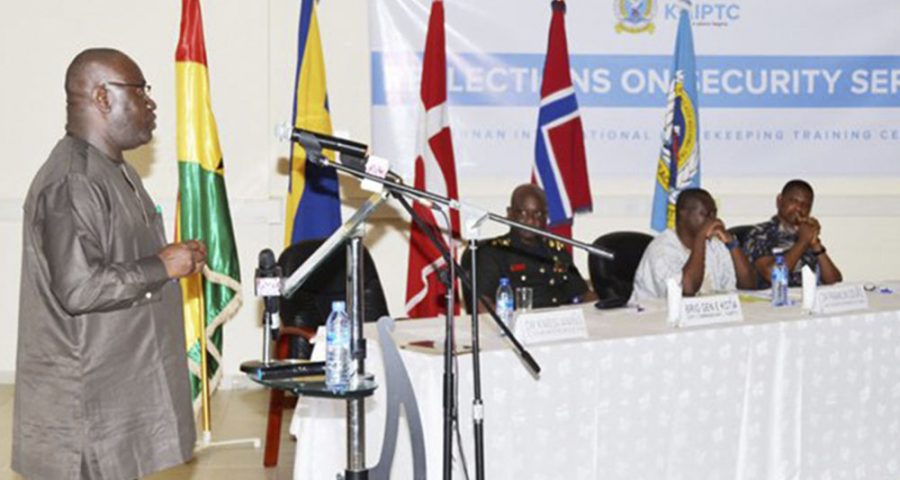 The aftermath of the 2016 general elections, has been marred by some worrying occurrences that threatened to unravel and overshadow the commendable democratic gains made through holding successful elections in December last year. The activities of vigilante groups, particularly, have  raised a lot of eyebrows and concerns on the nation’s security and the effectiveness of its security institutions.

These were some observations made by Dr. Franklin Oduro, Head of Research and Programs, and Deputy Director, CDD-Ghana and CSP Dr. Benjamin Agordzo, Director, Transformation, Ghana Police Service when they featured as the main speakers during KAIPTC’s , welcomed  Reflections on Security Series held under the theme: “Reflections on the 2016 Elections: Examining the Post-Election Environment in Ghana”.

Dr. Franklin Oduro examined the transition period after the 2016 elections focusing on the good, bad and ugly sides of the whole process. Dr. Oduro expressed his delight at the level of leadership and maturity demonstrated by both the outgoing and incoming presidents through the exchange of congratulatory and commendation messages, their acceptance of the verdict of the Electoral Commission (EC), as well as exhibiting high levels of cooperation and accommodation, notwithstanding the occasional disagreement and miscommunication.

He revealed that the “existence of the President (Transition) Act, 2012 (Act 845) provided a framework for the political transfer of power from one democratically elected president to another – with the aim of ensuring the transition challenges of 2001 and 2009 are not repeated”, a move he highly applauded.

On the down side, the CDD-Ghana deputy boss, was utterly dismayed at the failure of government and law enforcement agencies to deal decisively with politically affiliated vigilante groups who stormed and invaded sensitive government installations such as the passport office and the Tema Ports and Harbor, forcefully taking over state assets and public facilities which included toll booths and public places of convenience.

Dr. Franklin Oduro wished the proposed November 7th election date would be considered, to allow ample time for the transitional team to work effectively, whiles enabling early set off into a new administration.

CSP Dr. Benjamin Agordzo, took his turn to pinpoint some major challenges faced by the National Election Security Task Force (NESTF), during and after the 2016 general elections. Funding, prosecuting of electoral offenders and dealing with vigilante groups were tops of his list.

CSP Dr. Agordzo revealed that “during the 2016 general elections, the NESTF did not receive any kind of funding from government except the provision made for ration for personnel”. This, he said, distorted the training of personnel and provision of logistical support needed for the task force.

He added that since the EC, as a member of the NESTF, could determine to a large extent the duties of the security agency, it would be appropriate for the EC to consider factoring the budget of the NESTF into that of the EC to truly insulate the NESTF from undue interferences.

Dr. Agordzo, Director of the Transformation Programme Office, at the Police Headquarters,  tasked Civil Society organizations especially, to work towards amending the section of the law which prevents the police from prosecuting electoral offenders without the consent of the Attorney General (1992 P.N.D.C.L. 284). “This would go a long way to neutralizing the hands of politicians in electoral offences”, he said.

Talking on the post-election violence, Dr. Agordzo declared as shameful, the assault of political opponents and appointees of the new government, seizure of public property such as waterfalls, national security infrastructure among others.

He said although the Ada Communique which barred all political parties from associating themselves with political vigilante activities was signed by all parties, it was evident the process was just a show off by the political leaders, as these vigilante groups act with the full support of their respective political parties.

“This for me is another admission that arrest and prosecution alone is not the way forward…for me, the medium to long term solution lies in empowering the police to work professionally”, he said.

CSP Dr. Benjamin Agordzo in his concluding remarks made one strong recommendation for the approval in parliament of the IGP coupled with a security of tenure, which he believes would make the police loyal to the people of Ghana, instead of particular governments.

The Reflection on Security Series was also graced by Brigadier General Emmanuel Kotia, Deputy Commandant of the KAIPTC, and Dr. Emmanuel Kwesi Aning, Director of FAAR, and Chairman for the occasion.