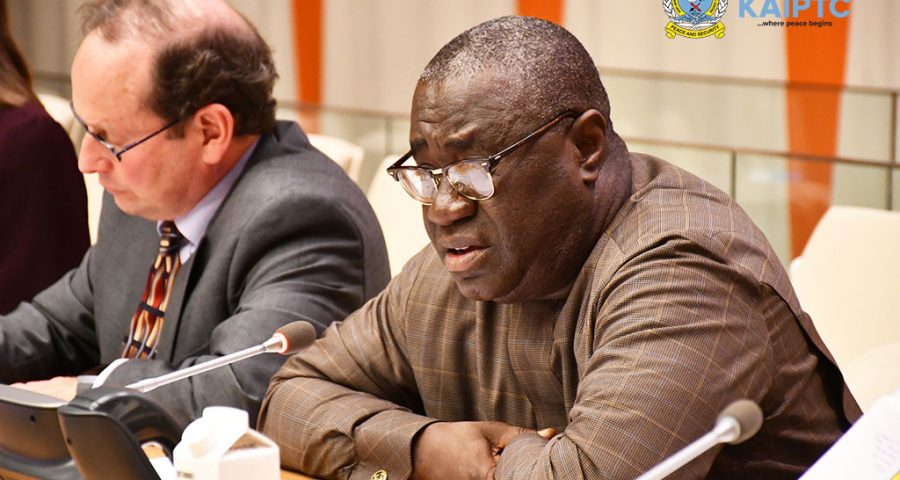 Director of Faculty of Academic Affairs and Research at KAIPTC promoted to Professor.

The Director of the Faculty of Academic Affairs and Research at the Kofi Annan International Peacekeeping Training Centre (KAIPTC), Kwesi Aning, has been promoted to Professor.

Professor Aning joined the Centre in January 2007. He has previously worked at the Institute of Economic Affairs (IEA) and then African Security Dialogue and Research (ASDR), before being headhunted to serve as the African Union’s (AU) first expert on counterterrorism from 2005-2007. As part of his responsibilities, he had oversight responsibility for the AU’s African centre for the Study and Research on Terrorism (ACSRT) in Algiers, Algeria, where under his watch, a Code of Conduct was designed for member states, a threat assessment template and a Model Counter-terrorism Law was also developed.

In both 2006 and 2014, he was invited to write the Independent mid-term in-depth evaluation of the Global Programme on Strengthening the Legal Regime against Terrorism (https://www.unodc.org/documents/evaluation/indepth-evaluations/2015/GLOR35_Mid-term_In-Depth_Evaluation_Report_May_2015.pdf) . In 2008, he wrote a UN Secretary General’s report on the relationship between the United Nations and regional organisations, in particular the African Union, in the maintenance of international peace and security. Until January 2019, he served on the UN Secretary General’s Advisory Group for the Peacebuilding Fund. He specialises in peacekeeping economies, hybrid security/political orders and organised crime.

His recent publications include:

He attended Mfantsipim School from 1975-1982 where he studies for his ordinary and advanced level general certificate examinations. He continued to the University of Ghana and majored in History with a minor in Religions in 1986. As a result of student political disturbances, he left for Denmark in 1986 where he got political asylum and lived until 2000. During his period there, he learned Danish and completed a cand. Phil. in history in 1990, with a dissertation on Strategies of Non-alignment: Nkrumah’s foreign policies, 1960-1966. Between 1991-1995, he engaged in ethnic minority politics serving on the Council of Ethnic Minorities, which was an advisory body to the government through the Ministry of the Interior. He also headed the national association of Danish Refugee Friends for several years, which provided support and advisory services to asylum applicants all over Denmark. He completed his doctoral studies at the Department of Political Science, University of Copenhagen, in 1998 with a dissertation on the Liberian civil war and the intervention by the Economic Community of West African States (ECOWAS).

KAIPTC congratulates Professor Aning on this great accomplishment and recognition!