President Akufo-Addo cuts sod for the construction of a memorial Statue in honour of H.E. Kofi Annan 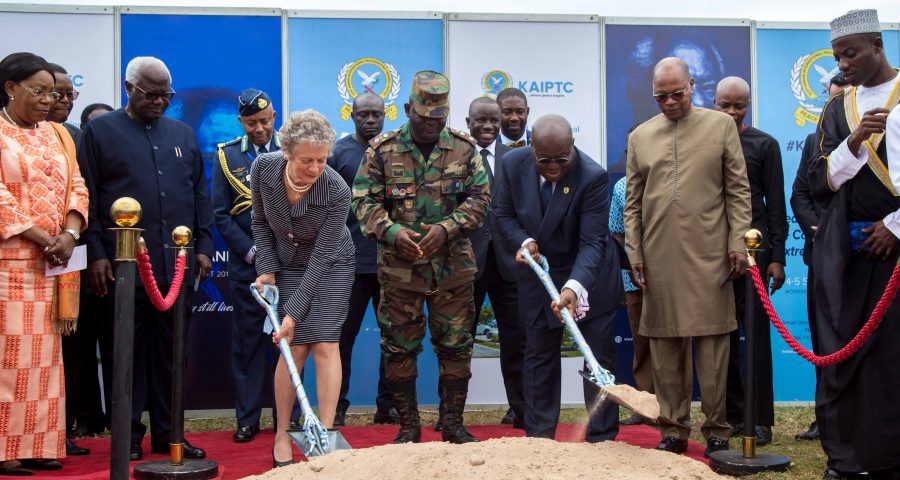 President Akufo-Addo cuts sod for the construction of a memorial Statue in honour of H.E. Kofi Annan

HE Nana Addo Dankwa Akufo-Addo, President of the Republic of Ghana has cut a sod at the Kofi Annan International Peace Keeping Training Centre (KAIPTC) for the construction of a 20-foot memorial statue in honour of H.E. Kofi Annan, former Secretary-General of the UN (1997-2006).

The statue which will be situated at the entrance of KAIPTC at Teshie in Accra, will be constructed with marble, and will have a width of six feet and weigh 21 tonnes for all to see and appreciate Ghana’s International Peace Diplomat on a giant scale. The project is scheduled to be completed in six months and will serve as an everlasting memory of the Ghanaian diplomat.

Before cutting the sod with Mrs. Nane Annan, widow of the late Kofi Annan, H.E. Nana Akufo-Addo, eulogised the late international diplomat, describing him as “a man of principle, a man who valued important concepts in life and who lived his life according to those values.” Mrs Annan, after watching a concept video of the statue, described the monument as a depiction of her husband’s “optimism and vision to make life better for all.” On behalf of her family, she expressed her appreciation to all who supported and helped them during his demise.

Elaborating on the materials to be used for the statue, the Deputy Director, Engineer Services and Chief Military Architect of the Ghana Armed Forces, Lt Col AB Tekyi, stated that the statue will be produced in a grey ornamental stone marble known as Sierra Elvira. “This type of marble stone is original, hard-wearing, durable, water resistant and has no weather coloration,” he added.

The sod cutting was a special event as part of the maiden Kofi Annan Peace and Security (KAPS) Forum which is a flagship annual event designed to bring together political leaders, diplomats and experts to dialogue and share ideas on the most critical evolving peace and security trends on the African continent. The theme for the forum was ‘Peace Operations in the Context of Violent Extremism in Africa,” and was organized by (KAIPTC) in collaboration with the Federal Government of Germany and the Government of Norway.