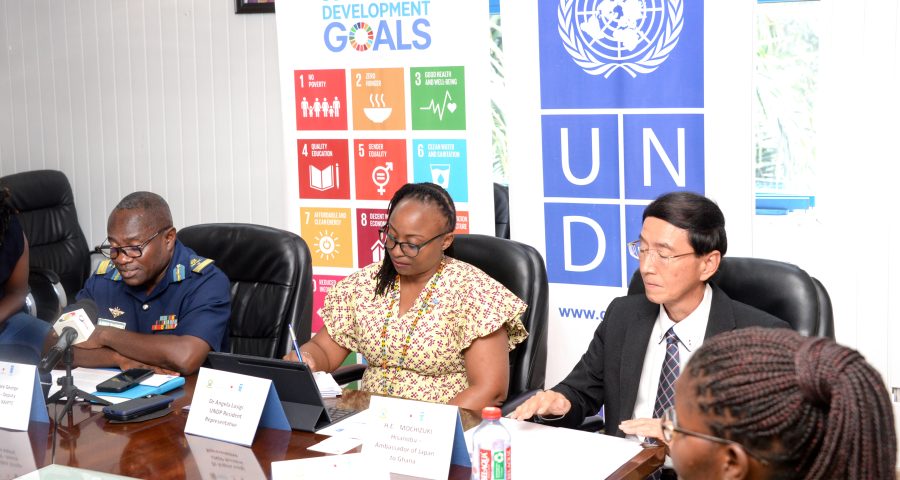 Accra, May 2022: A year-long project aimed at building the capacities of security and civil society actors in five countries in the sub-region to prevent and counter violent extremism and terrorism (VET) has successfully ended.

The project, dubbed:  “Strengthening Response Capacities of State and Civil Society Actors in Preventing and Countering Terrorism and Violent Extremism in Coastal States in West Africa” was implemented from March 2021 to March 2022.

With funding support from the Government of Japan, the project was implemented by the Kofi Annan International Peacekeeping Training Centre (KAIPTC) in collaboration with the United Nations Development Programme (UNDP).

The objective of the project was to shore up the capacities of relevant state and civil society actors from Ghana, Benin, Togo, Cote d’Ivoire and Burkina Faso to proactively respond to terrorist and violent extremist threats by promoting inter-agency collaboration, information and intelligence sharing.

The Project activities included consultative visits to Ghana, Benin, and Burkina Faso; field research; capacity development, and cross-border workshop in Burkina Faso, which brought together 32 experts and practitioners to deliberate and contribute to countering violent extremism and terrorism discourses.

Capacity training interventions were also organised for 49 state and civil society actors in Accra and Abidjan, which enhanced the understanding of participants on VET.

Through the consultative meetings, it was identified that triggers and pre-conditions for VET are endemic in the sub-region. Other findings were youth vulnerabilities to VET, geographic spaces as havens for VET, and radicalism among prisoners in correctional services.

The project also produced a research publication to guide policy formulation on terrorist and violent extremist activities in the region. Titled: “Beneath the seeming resilience: Assessing Ghana’s Vulnerabilities to Threats from Violent Extremist Groups,” the paper analyses patterns and threats of violent extremism in the sub-region using Ghana as the case study.

At the end of the project, the beneficiary actors said the initiative among others created the platform to share information and learn from the experiences of other countries, as well as the roles of CSOs and women in the prevention of terrorist activities.

Violent extremism and terrorism has been gaining momentum in Africa with the Sahel Region experiencing frequent attacks, targeting both civilians and security officials. Insecurity occasioned by the threats to human security continues to rise at an alarming rate.

In recent times, countries alongside Burkina Faso such as Togo, Benin and Cote d’Ivoire persistently encounter militant groups along their contiguous borders resulting in several fatalities.

The United Nations documented more than 6000 fatalities in the three Sahelian countries of Mali, Niger, and Burkina Faso in 2020. This represents an increase of more than eightfold over 2016 estimates.

There have been concerns that border communities, civil society and other non-state actors are often overlooked as key partners in reducing this menace.

Speaking at the official closure of the project in Accra, Air Commodore George Arko-Dadzie, Deputy Commandant, KAPITC, said international, regional, sub-regional and national efforts towards combatting violent extremism had prioritised a holistic approach over the traditional military approach in dealing with the menace.

That approach, he said, had been challenged by structural problems of weak states, porous borders and new challenges that the COVID-19 pandemic presented.

He said the project had contributed to the knowledge of the nature of terrorist and violent extremist activities in the region to guide policy formulation.

“It also created the opportunity for networking among various stakeholders and actors working to prevent and counter violent extremism and terrorism in the sub-region,” Air Commodore Arko-Dadzie said.

Dr. Angela Lusigi, Resident Representative of the UNDP in Ghana, said activities of extremists and terrorists are spreading across the region and undermining human security.

“This threat to the wider security of the sub-region also puts the economic, social, political and environmental gains we have made towards the achievement of the Sustainable Development Goals at risk,” she said.

Dr. Lusigi underscored the need for countries and stakeholders to work together, emphasising that “the causes and effects of terrorism and violent extremism do not respect national borders.”

Mr. Hisanobu Mochizuki, the Ambassador of Japan to Ghana, said it was the priority of the Government of Japan to support safeguarding the safety and security of its partners against rising terrorist activities.

“However, we cannot do it alone; we need strong partnerships to identify the root causes of these rising terror threats, and sensitise communities against allowing terrorists to use their communities as safe havens,” he said.

He encouraged the beneficiaries of the project to use the knowledge they had acquired to fight against existing threat, adding that maintaining peace required coordination, understanding, and information sharing.