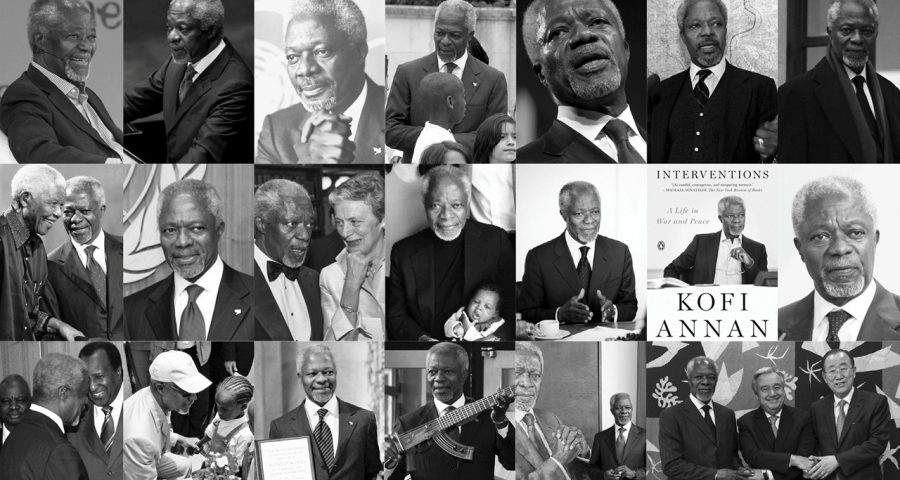 Accra, September, 2018: “A global colossus, he proved that an ordinary man can achieve extraordinary things, he was huge and yet humane” – these were some of the attributes Professor Henrietta Mensah-Bonsu, Moderator for a celebratory symposium held in honour of HE Kofi Annan, used in describing the former United Nations (UN) Secretary General.
Organized on the theme: “Celebrating Kofi Annan: A World Class Statesman” on Friday, 7th September, 2018 at the Kofi Annan International Peacekeeping Training Centre (KAIPTC), the event focused on celebrating the illustrious life and works of H.E. Kofi Atta Annan.
Present to highlight the extraordinary attributes of one of Ghana, Africa and the world’s brightest stars were Honourable Shirley Ayorkor Botchway, Minister for Foreign Affairs and Regional Integration, Ghana, Ambassador Patrick Hayford, Former Director of the UN Office of the Special Adviser in Africa, Lieutenant General EA Erskine, First Force Commander, UN Interim Force in Lebanon (UNIFIL), and Her Excellency Christine Evans-Klock, UN Resident Coordinator.
Welcoming the audience, the Commandant of the Centre, AVM Griffiths Evans noted some of the great achievements of HE Kofi Annan, and KAIPTC’s privilege of bearing his name and being associated with him; “the global statesman, champion of peace, advocate of the Rule of Law that he was… His name and our association with him is of inestimable value to us; his name has given us global prominence and opportunities for our work as a Centre”, he said.

Rising through the ranks within the UN to become the first black man to ascend the glorious office of the UN Secretary-General, Ambassador Patrick Hayford was present to witness it all. He described the statesman as a caring listener. He noted that he was extremely gracious in how he dealt with everyone, was empathetic, and calm and composed no matter the pressure. He added that he was a stickler for details, and insisted on broad consultations with all constituencies on matters, but was also consistently firm with his decisions after the processes for the consultations were complete. Ambassador Hayford concluded by noting that “striving for the things he believed in such as feeding the poor, educating children, empowering women, among others”, was the best way to remember Kofi Annan.

Honourable Shirley Ayorkor Botchway, on her part, added that Mr Annan epitomised the best in socio-political aspirations, and transcended them for projection on the international scene. She further explained, “Dr Annan embodied the projection of the best of Ghanaian values, culture and foreign policy” and that, “the tactful skill that he exhibited as an international diplomat and a world class statesman has been traced by himself as being in part due to the abundance of counsel within the local context of where he grew up”.

In a speech read on her behalf, Her Excellency Christine Evans-Klock, said Mr Annan was “one of us”, and showed such humility in the discharge of his duties. “He repeatedly proved himself, not only in the substantive areas of work but in terms of teamwork, in how he inspired co-workers, in how he handled the daily stress of the demands of the job with calmness and integrity, and how he kept his focus steadfastly on enabling the UN to live up to its vision and its purpose”, she said.

Joining via video conference, Lt Gen Erskine shared some of his professional and personal experiences with HE Kofi Annan, noting that he had indeed lost a dear friend.

Giving her closing remarks as Moderator for the event, Prof Mensa-Bonsu, Former Director of the Legon Centre for International Affairs and Diplomacy (LECIAD), challenged all to exemplify the principles and values of HE Kofi Annan to make the world a better place as he strove for. She had earlier extoled him for spearheading the adoption of the Principle of Responsibility to Protect (R2P) and the UNSCR 1325 on Women, Peace and Security, both of which made States primarily responsible for the welfare and non-violation of the rights of their citizenry, and recognizing women as key partakers in peace processes, respectively.

The symposium was well attended by the Centre’s Development Partners, members of the Diplomatic Corps, the Military High Command, Members of Parliament, and other guests from the public and private sector.
HE Kofi Annan died on 18th August 2018 at the age of 80 in Bern, Switzerland after a short illness.
The Ghana Armed Forces named the Kofi Annan International Peacekeeping Training Centre after him in 1998 in recognition of his remarkable achievements.
-ends-
For further information, please contact the Corporate Affairs Unit of the Kofi Annan International Peacekeeping Training Centre (KAIPTC) on 0302-718200 ext 1104/1203 or 0550-303030. You can find the KAIPTC on facebook and twitter as: @Kaiptcgh. You can further find out more about the KAIPTC on our website: www.kaiptc.org.

About the Kofi Annan International Peacekeeping Training Centre:
The Ghana Ministry of Defence (MoD) established the Kofi Annan International Peacekeeping Training Centre (KAIPTC) in 1998 and commissioned it in 2004. The purpose was to build upon and share Ghana’s five decades of internationally acclaimed experience and competence in peace operations with other states in the Economic Community of West African States (ECOWAS) region and the rest of Africa. This was in recognition of the need for training military, police and civilian men and women to meet the changing demands of multidimensional peace operations. The Centre is one of the three (3) Peacekeeping Training Centres of Excellence mandated by the ECOWAS to offer training in peacekeeping and peace support operations (PSO) in Africa.
The Centre delivers training courses in in three thematic areas; Peace Support Operations, Conflict Management and Peace and Security Studies and also runs Masters and PhD programmes in same. The KAIPTC has a world-class research department that undertakes research in the thematic areas in Peace and Security. Located in Accra, Ghana, the KAIPTC is an internationally-recognized institution and has till date trained and tutored over 15,000 participants and students since its inception.