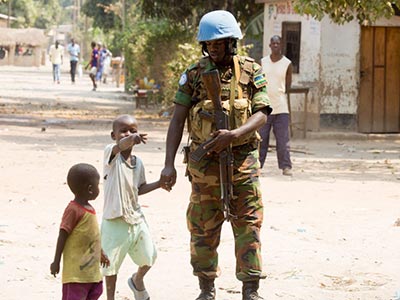 The changing nature of armed conflicts has resulted in an increased civilian-combatant interface, to the extent that contemporary conflicts have been referred to as ‘wars among the people’. Civilian populations bear the greatest brunt of today’s complex and intractable conflicts. This changing nature of conflicts has necessitated both doctrinal and operational shifts in peace operations.
Protection of Civilians has increasingly become an integral component of contemporary peace operations. Emerging international support to the ‘Responsibility to Protect’ norm notwithstanding, peacekeepers and other actors involved in peace support operations are often not adequately prepared or trained to deal with the daunting task of protecting civilians.

The aim of the PoC course is to enhance the capacity of participants for the effective implementation of PoC mandates in Peace Operations, in order to mitigate the effects of conflicts on civilians.

The selection process will emphasize the presence of a relevant number of arms-bearers (member of the armed and security forces). This because of the latent opportunities and threats they might embody: they have the means to protect civilians but also the potential to harm them.

Priority will be given to applicants from the ECOWAS region.

We strive for a balanced representation of genders, nationalities, missions and components.

The PoC course combines theoretical and practical sessions on the following modules/topics:

The course will be delivered through a combination of lectures, case studies, small group works and exercises. The “Problem-Based Learning Approach” will be used in the delivery of the course: participants will play a very active role under the guidance of an experienced team of facilitators.

The course generates a lot of interest and a high number of applications. This will make the selection very competitive. The process will be as following: