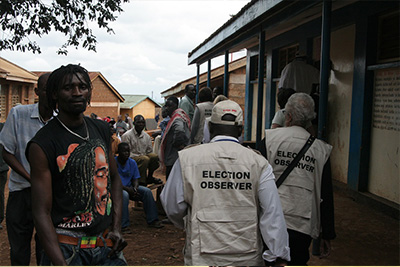 Course Fee: Each participant shall be required to pay a course commitment fee of $1000 (one thousand) USD as well as take care of his or her travel expenses. Feeding and accommodation will be provided at the Centre for the duration of the programme. Participants are also required to have health insurance cover for the training period. There is also a Covid 19 Policy in place at the Centre to guide training. The health cover should include the treatment of covid 19 sickness.

Terms and Conditions:
AS part of the covid-19 measures by the Kaiptc, all participants are to travel with a travel medical insurance covering covid-19 treatment and must be valid for an additional 2 weeks after the course end date. Covid guidelines of the Centre must be strictly followed. The Kaiptc does not accept any responsibility for medical treatment and travel or other insurance.

These seeming success stories notwithstanding, concerns and questions continue to linger over the integrity of the conduct of democratic elections on the continent. The fact that opposition parties in many countries having cause to dispute results, questioning the credibility and fairness of the process suggests that work still remains to be done in ‘perfecting’ the democratic enterprise in much of Africa.

Observation Training programme has trained nearly 525 observers many of whom have been deployed on observation missions by ECOWAS and other observation missions. At the regional level, ECOWAS has played a leading role in moderating a sometimes uncertain political terrain of member countries by promoting democracy and multiparty elections. The ECOWAS Protocol on Democracy and Good Governance identifies the organisation of election observation during elections in member states as a key component of its conflict prevention mechanism. As a result, the Commission through the agency of the Political Affairs Department plays a leading role in the organisation of election observation missions during member states’ elections; all in an effort to help bolster and consolidate democracy in the region. The Centre has since 2004 collaborated with the Commission to provide training for election observers in West Africa. To date, the ECOWAS/KAIPTC Election

This is a bi-lingual course with simultaneous English/French translation.

Modules of the course

The course covers a total of six (6) modules consisting of seventeen topics and a simulation exercise. They are as follows.

The modules present the significance of election observation groups – both international and domestic- and the distinct role they play in promoting fair, transparent and peaceful elections.

The course will use experienced resources persons from within Africa

Interested applicants are kindly requested to click on the “How to Apply” button in order to fill and submit the online application form.