The Centre has commissioned a new block in honour of one of its past Commandants, Air Vice Marshal (AVM) Griffiths Santrofi Evans (Rtd) for his exemplary leadership during his tenure from 2017 – 2019. The ‘GS Evans Block’, which was initiated by him, will accommodate the Design and Production Unit (DPU), the Language Centre, the Business Development Unit, and the Centre’s armed guards. The Guest of Honour for the occasion was the Chief of the Defence Staff (CDS) of the GAF, Vice Admiral Seth Amoama, and AVM Evans (Rtd), the honoree, was the Special Guest. 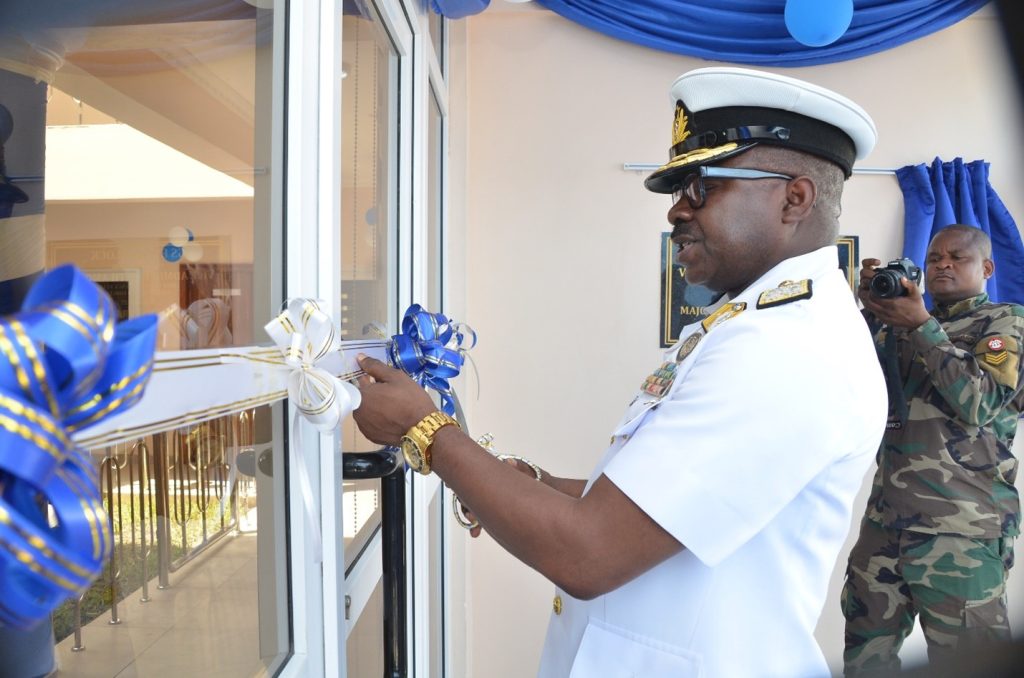 Maj Gen Francis Ofori (Rtd), the immediate past Commandant, noted that as part of the Centre’s efforts to ensure financial sustainability, a seed was sown by his predecessor to provide befitting office spaces for the Units aforementioned to support delivery of courses at the Centre. The intention, he added, was to have in-house interpreters and translators and at the same time, position the DPU to  commercialise  their products and services, and diversify the sources of internally generated funds (IGF) for the Centre.

He acknowledged the financial support received from the CDS and the German Government through GIZ towards furnishing and final completion of the building respectively. Vice Admiral Seth Amoama in turn, commended Maj. Gen Francis Ofori (Rtd) for completing the structure, using the Centre’s IGF, despite the numerous constraints encountered. He also urged users of the facility to accord it the greatest care and attention.

In a brief but profound speech, AVM Evans (Rtd) noted that the honour accorded him would not have been possible without the Directors and staff who helped to conceptualize and operationalize the project. He noted that for the Centre to stand out amidst the teeming competition, it was his belief at the time that the institution could maintain a unique stature if the research and knowledge products could be packaged for easy access by peace and security actors and stakeholders. With his ideation now fruitful, he was hopeful that the block would continue to produce and publish the Centre’s publications to maintain the Centre’s leadership role in peace and security in the region. He urged all staff to work within the framework of teamwork to enable the Centre to grow and achieve its vision.