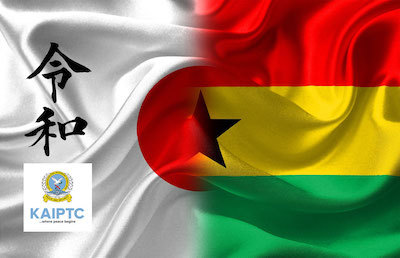 The Kofi Annan International Peacekeeping Training Centre (KAIPTC) commends the people and government of Japan on the successful royal transition. On 30thApril2019, His Imperial Majesty, Emperor Akihito abdicated the throne to mark the end of the Heisei era in Japan. The following day on 1stMay2019, the coronation of a new Emperor, His Imperial Majesty, Emperor Naruhito was successfully concluded.

KAIPTC has been a significant friend of Japan, helping to implement Japan’s peace and security assistance programmes in Africa in the last 11 years through research and capacity development in the peace and security sector in West Africa. During the above-mentioned period, KAIPTC has trained thousands of mid-career West African security sector personnel on issues such as border security management, small arms and light weapons control, terrorism in peacekeeping, collaborative policing and arms stockpile management. In 2017, the Centre developed a senior command course for the Police in Liberia with support from the Government of Japan through the United Nations Development Programme (UNDP). These achievements have been possible because of the consistent goodwill and passion of the people and government of Japan.