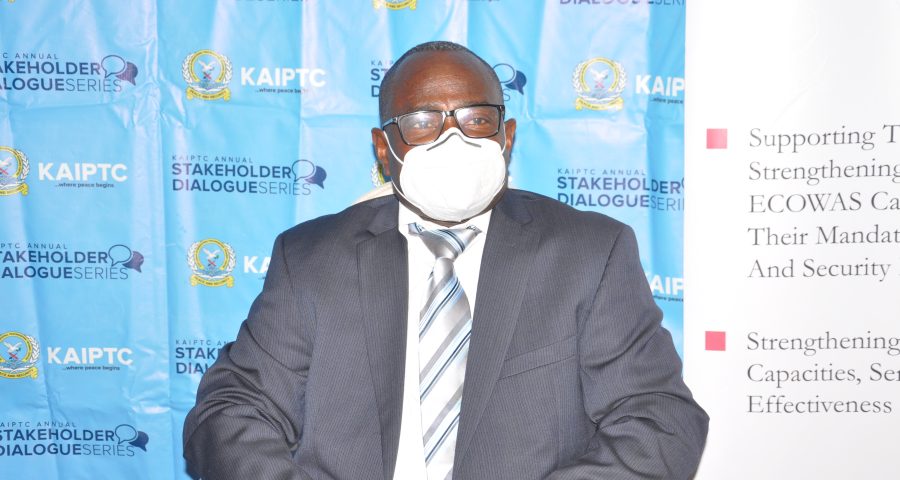 Dakar: Speakers at the second edition of the Kofi Annan International Peacekeeping Training Centre’s (KAIPTC) Stakeholder Dialogue Series (SDS) in Dakar, Senegal, have called for the active participation of Civil Society Organisations (CSOs) in the implementation of the ECOWAS Conflict Prevention Framework (ECPF).

They said CSOs had an important role to play in the promotion of peace and security in West Africa and must facilitate peaceful dialogue among citizens and the State as well as collaborate to address the security threats confronting the region.

The event, held in Senegal on March 22, 2022 was attended by stakeholders in the security space, comprising CSOs in West Africa, specifically, Senegal and The Gambia, ECOWAS, Development Partners, Government Agencies and Non-Governmental Organisations.

The second edition of the Stakeholder Dialogue Series, organised in collaboration with the (WANEP), falls under the KAIPTC’s five-year strategic plan to strengthen collaborations with CSOs, Think Tanks and the private sector to advance policy dialogues and improve peace and security in Africa.

It is also in keeping with WANEP’s strategic objective to play a facilitation role in the implementation of the ECPF as well as the requirements enshrined in the framework of a five-year Memorandum of Understanding (MOU) between the KAIPTC and WANEP.

The event, supported by the German Development Agency (GIZ), was under the theme: “Contributing to the Implementation of ECOWAS Conflict Prevention Framework: Promoting Partnerships with Civil Society Organisations on Peace and Security in West Africa.”

This year’s edition, which focused on strengthening partnership with CSOs, is being hosted in two countries – Senegal and The Gambia. The second event in this year’s series will be held in The Gambia on April 5, 2022.

In his opening remarks, Air Commodore Arko-Dadzie said there was the need for improvement in the platforms that promote collaborative approaches to peacebuilding and conflict prevention on the continent.

He observed that there was lack of a centralised database of CSOs working at the community, national and regional levels that support the implementation of the ECPF, adding that were also limited efforts at leveraging on the strengths of relevant actors in the peace and security sector.

“More critically, ECOWAS’ expectations of relevant stakeholders’ roles in the implementation of the ECPF and other frameworks also need much clarity and understanding,” he said.

Air Commodore Arko-Dadzie said the KAIPTC had over the years strongly realised the need to cooperate and collaborate with other institutions to increase the reach and maximise the needed impact of peace and security.

He said since the adoption of the ECPF in 2008, both KAIPTC and WANEP have worked extensively as part of their mandates to advance peace and security in the region.

“Collectively, we have worked with ECOWAS in the areas of research, training, capacity building and policy support to ECOWAS, Member States and other international partners to promote peace and stability in West Africa,” he said.

Mrs Addae-Mensah noted that the KAIPTC and WANEP have had a fruitful relationship over the years, and had jointly held initiatives on peace and security.

She said both institutions recognised the key role of CSOs in contributing to peace, and therefore partnered to hold the dialogue series to highlight their expected roles.

She highlighted the insecurities in the region, and noted that it was important to reflect to pin point the causes, especially since the provisions of the ECOWAS’ Conflict Prevention Framework seeks to avert conflicts and assure a secure sub-region. Mrs Addae-Mensah said through the Stakeholder Dialogue Series, KAIPTC, WANEP and the CSOs could share ideas and strategies to help Member States and ECOWAS to implement the ECPF.  She thanked KAIPTC for the SDS initiative and also commended ECOWAS for their efforts at fostering peace and security in the West Africa region.

Ms Nani said the Covid-19 pandemic and the recent political crises across West Africa has underscored the need for organisations to work together towards common objectives of achieving peace and stability in the region.

She said the increasing number of military coups and unconstitutional changes in West Africa since 2019 pose a significant challenge to the democratic order and the peaceful development of the sub-region.

Ms Nani said the GIZ believed that mutually beneficial engagements between the KAIPTC and CSOs across the region would yield the requisite capacities and cooperation that were needed to support peace and security endeavours in the framework of the ECOWAS Peace and Security architecture.

The KAIPTC launched the Maiden Edition of its Annual Stakeholder Dialogue Series (SDS) in March 2021, with the aim of creating a platform to engaging its clients, development and institutional partners, CSOs, as well as other stakeholders on specific issues of concern within the Peace and Security landscape.