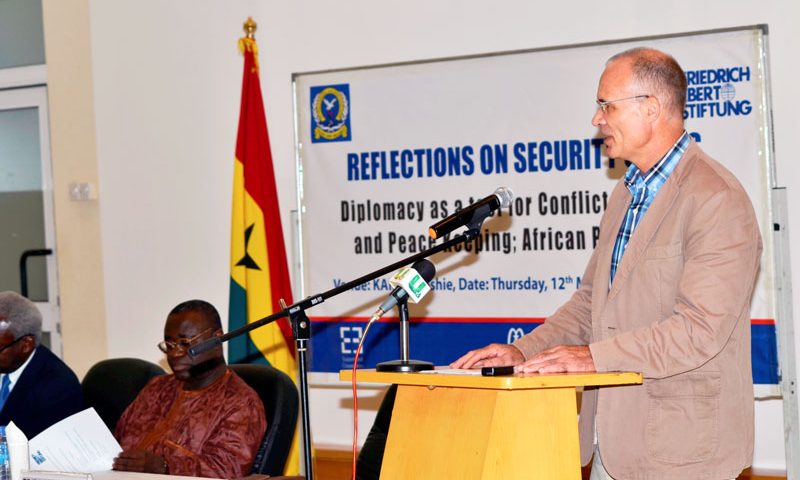 The Kofi Annan International Peacekeeping Training Centre (KAIPTC) is set to host its ‘Reflections on Security Series’ to provide the platform to unpack the complex security dimensions of the surge in terrorist attacks in West Africa.

The forum will be held at the Kofi Annan International Peacekeeping Training Centre (KAIPTC) on Thursday, 4th July from 09:30a.m. – 12:00p.m. Participants will be drawn from members of the diplomatic corps, academia, students, civil society organisations, media practitioners, the business community and officers from security agencies, hospital industry, and religious organisations.

KAIPTC is hosting this series in the wake of increasing activities of violent extremist groups in parts of West Africa. These radical extremist groups continue to use asymmetrical tactics to undermine efforts at strengthening governance and security in their areas of operation through a series of attacks such as kidnappings, bombings among others. The activities of these groups have generated mixed reactions from different sections of society.

The series seeks to provide an open space within which topical and sensitive national, regional and international issues can be discussed by relevant stakeholders premised on trust, openness and reciprocal respect.

Security experts such as Dr. Festus Aubyn, Supt Raymond Adofiem Wejong and Mr. Mutaru Mumuni Muqthar will sit on the panel which will be chaired by Dr. Kwesi Aning.

The panellists will also reflect on the level of state preparedness to respond to these emerging threats from radical extremist groups and the role of the citizenry in reducing the threats from these radical groups. The role of different sections of society i.e., the business community, religious bodies, community leaders, community ‘watch dogs’ and the international community in mitigating violent extremism in the region will also be explored.

Some of the key issues to be explored at the seminar include the various groups involved in terrorist attacks, their motivation and main targets; the role of irregular migration through porous borders and its contributions to the surge in terrorist attacks will also be discussed.

At the end of the forum, it is expected that participants will have acquired sufficient knowledge on the threats from radical extremist groups and begin to serve as advocates in the prevention of terrorist threats.