His Excellency Kofi Annan is 80! 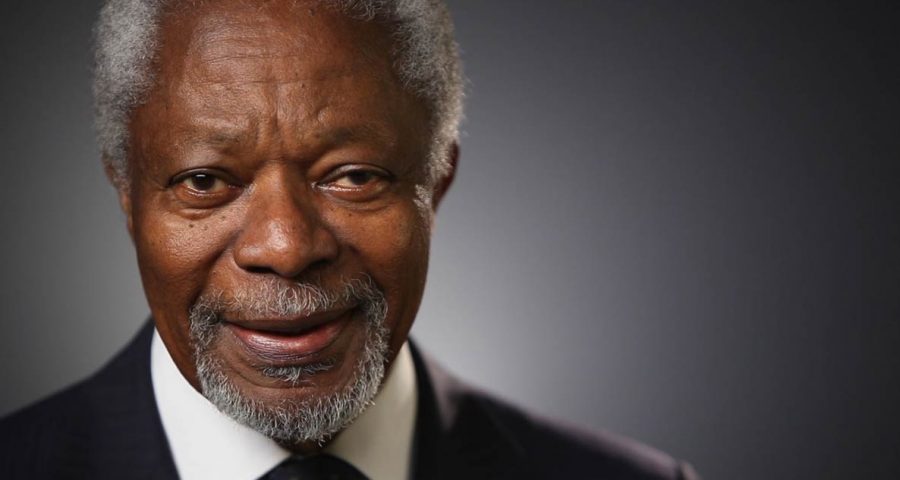 His Excellency Kofi Annan is 80!

Describing himself as being atribal in a tribal world, Dr Kofi Annan was born on 8th April, 1938 in Kumasi in the Ashanti region of Ghana. He attended the Mfantsipim School, in Cape Coast from 1954 to 1957. Whiles at Mfantsipim, he learned that “suffering anywhere concerns people everywhere.” This lesson followed him throughout his life.

After he graduated from Mfantsipim, Dr Kofi Annan attended the Kwame Nkrumah University of Science and Technology. He received a Ford Foundation grant, which allowed him to study Economics at the Macalester College in St. Paul, Minnesota, in the year 1961.

Though Economics was his field of study in Macalester College, he still nurtured the desire to become a diplomat and skilled in international relations. After receiving his Bachelor’s degree, he moved to Geneva, Switzerland after Macalester, and attended the Graduate Institute of International and Development Studies, where he completed his DEA degree. He then took a break from his education to work as a budget officer for the World Health Organization.

After a few years, he studied in the Sloan Fellows program, and then he attended the Massachusetts Institute of Technology. Dr. Annan was appointed Secretary-General by the United Nations (UN) General Assembly in December 1996, the topmost position of the UN. He began serving his four-year term of office on January 1, 1997.

Dr. Annan’s code of soft-spoken diplomacy was given a boost by the outcome of his talks with Saddam Hussein in 1998. UN observers waited to see how additional crises will be handled by the gentle but determined man from Ghana.

In the summer of 2001, the United Nations unanimously appointed Kofi Annan to his second five-year term as Secretary-General. On October 12, 2001, the Nobel Peace Prize was awarded jointly to the United Nations and Dr Kofi Annan. The Nobel citation pointed out that Kofi Annan had brought new life to the peacekeeping organization, highlighted the United Nations’ fight for civil rights, and boldly taken on the new challenges of terrorism and acquired immune deficiency syndrome (AIDS).

On the occasion of his 80th birthday, KAIPTC joins all Ghanaians, Africans and the world to celebrate a great icon of world peace! Happy birthday Sir! We wish you more years of great grace and strength as you continue your excellent work for our world.