The Federal Government of Germany and the Government of Norway have reiterated their support for peace and security on the African continent by supporting the maiden Edition of the Kofi Annan Peace and Security (KAPS) Forum organized by the Kofi Annan International Peacekeeping Training Centre (KAIPTC) at the Mövenpick Ambassador Hotel (KAIPTC) in Accra.

The main aim of the forum is to facilitate discussions on evolving trends in peace and security in Africa under the theme, ‘Peace Operations in the Context of Violent Extremism in Africa.’ The forum was also organized to honour the sterling achievements of H.E. the late Kofi Annan and to immortalise his memory.

Speaking at the opening ceremony of the forum, H.E. Christoph Retzlaff, Ambassador of the Federal Republic of Germany to Ghana shared Germany’s commitment to security and conflict prevention across the African region.

“Currently, Germany has deployed its largest-to-date military contingent to the UN Stabilisation Mission in Mali with more than 800 German soldiers.  And we are proud of the German Army’s long-standing and successful cooperation with the Ghana Armed Forces. The same is true for our close partnership with KAIPTC since the Centre’s inception in 2004. And I should, of course, mention our support for the establishment of the ECOWAS Maritime Coordination Center in Accra in 2018,” he outlined.

H.E. Retzlaff also shared key concepts to tackle violent extremism. “I would like to emphasise that regional cooperation and cross-border cooperation are of crucial importance both in the field of security and also in the fields of stabilisation and development,” he added.

Speaking on behalf of the Norwegian government, H.E. Øyvind Udland Johansen, Chargé d’Affaires, Norwegian Embassy in Ghana, commended Ghana for its long-standing peaceful environment and commended the KAIPTC for playing an instrumental role in promoting peace in the subregion.

He also highlighted Norway’s contribution to peace keeping across the world.

“More than 42,000 Norwegians have served in UN peace operations since 1949. In May this year, Norway provided a military transport aircraft for six months to the UN mission in Mali. Norway has also decided to maintain the camp facilities outside Bamako until the end of 2022 and to provide a new transport aircraft to the operation in 2021,” he briefed.

On combating violence extremism, H.E. Johansen, mentioned the need for a better understanding in order to deal with violent extremism due to the profusion and complexity of its root causes. These he said include “include injustice, marginalisation, lack of development, corruption, lack of a responsive government and externally supported religious radicalisation just to mention a few.”

The forum was held  under the Distinguished patronage of H.E. Nana Addo Dankwa Akufo-Addo, President of the Republic of Ghana and the Chairmanship of H.E. Dr. Mohamed Ibn Chambas, Special Representative of the UN Secretary-General and Head of the UN Office for West Africa and Sahel (UNOWAS).

The Kofi Annan Forum brought together two hundred high-level delegates including seven former heads of state, diplomats from governmental and intergovernmental organisations (including the African Union and its Regional Economic Communities, United Nations and European Union). Security professionals and representatives from policy and research think tanks, development partners, training institutions and civil society groups have been invited and are expected to attend the forum. 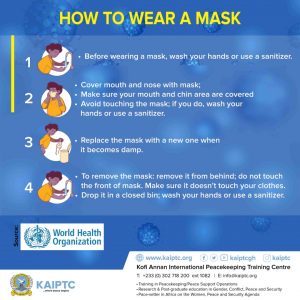