FAAR Work-in-Progress Seminar: The role and contribution of traditional authorities in consolidating democracy in Ghana 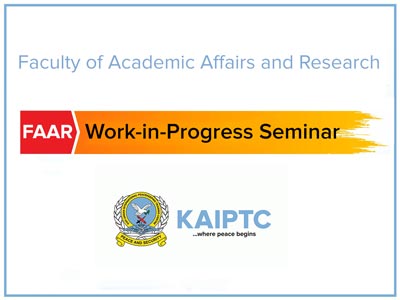 Abstract: Ghana is synonymous with peace, security and stability especially in a volatile sub-region. Since her return to multiparty democracy in 1992, the country has managed to stay afloat and devoid of civil wars despite it divisive politics which increasingly grows fractious with each election. Even so, the country has over the years been buoyed by some internal processes which continues to contribute to the resilience of the country. Several players and mechanisms such as the media, state political institutions, civil society, including traditional institutions have contributed in diverse ways to consolidating Ghana’s democratic gains over the years. Traditional institutions and traditional leaders in their varied forms remain a very significant aspect of Ghanaian society and their contributions to democratic processes cannot be ignored. Some scholars argue that this socio-cultural institution has borne the thankless task of providing cohesion to underpin the nation-state. Further, such institutions by their very nature are borne out of the people’s collective traditions and experiences and are therefore sometimes perceived as more viable than the formal systems of governance. Chieftaincy in Ghana, is a highly contentious/contested and politicized institution, nonetheless, chiefs and traditional leaders play very critical roles as sources of resilience in Ghana’s democratic processes and more especially in contributing to electoral processes. Because of the associated authority, power and influence of these institutions, they act as advisors, mediators and facilitate dialogue between political parties and their constituents. In some cases, they also bridge the gap between the state and citizens. On the other hand, traditional authorities and institutions are also known to be highly politicized and influenced by political parties and successive governments such that they can no longer be considered as neutral or mere civil society groups. Using case studies from selected regions in Ghana, this paper seeks to examine traditional authorities as sources of resilience in Ghana’s democratic processes. It explores the roles of traditional authorities in reducing electoral violence and tensions and how they contribute to consolidating Ghana’s democratic gains.

Afua Lamptey is the Acting Program head on the Conflict Management Programme located at the Faculty of Academic Affairs and Research (FAAR) at the Kofi Annan International Peacekeeping Training Centre (KAIPTC), Ghana. She holds a BA in Art from the Kwame Nkrumah University of Science and Technology and a Master of Philosophy in International Affairs from the University of Ghana. Her research expertise and publications are in the areas of gender, elections, armed violence reduction, border security management, peacebuilding, and maritime security. Over the past few decades, she has been involved in capacity building, research and policy analysis on peace and security issues in Africa with a strong focus on West Africa. She also has extensive experience in managing projects in the sub-region which are focused on reducing armed violence and strengthening the skills and capacities of a cross section of state and civil society actors.