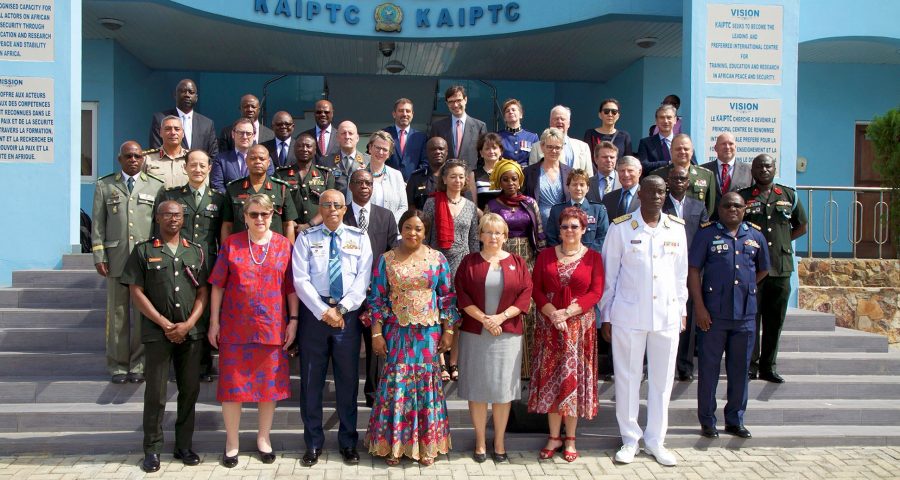 29 March 2019: The United Nations in collaboration with the Government of Ghana has held a Senior Missions Leaders Course (SML) at the Kofi Annan International Peacekeeping Training Centre (KAIPTC). The SML course, in part, prepared participants to assume roles and responsibilities associated with serving as members of missions’ leadership team. Some of such peculiar roles include serving as Special Representative of the Secretary-General (SRSG), Deputy SRSG, Force Commander, Police Commissioner, Director of Mission Support, or Chief of Staff.

The course alsofocused attention on deepening the understanding of Member State officials on contemporary UN peacekeeping missions. The two-week training course, held from 18 – 29 March, was organized by the UN Department of Peacekeeping Operations (DPKO) in conjunction with a host Member State and supported by KAIPTC. In all, a total number of 26 participants comprising ambassadors, diplomats, High Level UN Staff, Military Generals and Police Commissioners attended the course.

Speaking at the opening ceremony, Madam Ellen Loej, a former Special Representative of the UN Secretary-General, said more than 30 graduates of the SML Course were currently serving in the leadership teams of Peacekeeping Operations, Special Political Missions and Offices of Special Envoys.

She said 16 graduates from member states hold or have held a senior position in their various governments or diplomatic service which was directly related to peacekeeping operations.

“Effective leadership and management are recognized as drivers of these efforts. Senior Leaders must be equipped to manage contemporary crisis, lead teams and make decisions to effectively deliver the mandate of the UN,” she said.

Madam Shirley Ayorkor Botchway, the Minister of Foreign Affairs and Regional Integration, said the SML Course would go a long way in cementing Ghana’s accolades in peacekeeping and will leave a credible footprint in the international community. She lauded the Government of Canada and the Integrated Training Services of the UN DPKO for collaborating with Ghana to roll out the training.

She noted the fast pace with which peacekeeping operations were becoming more complicated and dynamic, highlighting the modus operandi of the various armed groups and militants, observing that “they are adopting the latest state-of-the-art technologies to perpetuate their motives and agenda; this calls for peacekeepers to be one step ahead of them in a bit to ensure that peace and order prevail in the areas of operations.” Hon Botchway said this task has implications on leadership hence the importance of the SML Course. She urged participants to bring their experiences to bear by contributing effectively during the course.

Dr Heather Cameron, the Canadian High Commissioner to Ghana whose Government sponsored the course, expressed Canada’s delight over the partnership with the UN, the Integrated Training Services and the Government of Ghana and KAIPTC.

She said, “The conflicts with which the UN is confronted and mission mandates issued by the Security Council are increasingly complex, a wider range of skills, assets and new technologies to get the job done in an increasingly difficult environment. At the same time, the UN is facing pressure for reforms, for cost of savings, and for operational efficiencies. For these reasons, the UN has embarked on a period of reflection and renewal which makes it a particularly important time for Canada to be engaged.”

She noted that Canada’s support to the SML is part of its commitment to prepare leaders to assume leadership roles and responsibilities in current and future UN peace operations.

She urged participants to share their collective experiences to make the course a great learning and networking one that will contribute significantly to future UN Peacekeeping Missions.

Speaking at the closing ceremony, Mamouna Quedraogo,Division Commander of Police – Burkina Faso, on behalf of her colleagues, touted the importance of the course; “With no doubt, these two-week courses have been very enriching. We have learnt a lot on leadership in UN-Peace Support Operations, Protection of Civilians, Gender mainstreaming, mission support issues, just to mention a few. We went through the complexities of strategic integrated planning,” she noted. She immensely praised the organisers and the Government of Canada for funding the course.

For further information, please contact the Corporate Affairs Unit of the Kofi Annan International Peacekeeping Training Centre (KAIPTC) on +233302-718200 ext 1104/1203 or +233 550 303030. You can find the KAIPTC on Facebook and Twitter as: @Kaiptcgh. You can further find out more about the KAIPTC on our website: www.kaiptc.org.

The Centre delivers training courses in three thematic areas; Peace Support Operations, Conflict Management and Peace and Security Studies and also runs Masters and PhD programmes in same. The KAIPTC has a world-class research department that undertakes research in the thematic areas in Peace and Security. Located in Accra, Ghana, the KAIPTC is an internationally recognized institution and has until date trained and tutored over 18,500 participants and students since its inception.