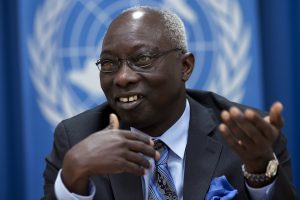 On the 3rd of October, the KAIPTC will welcome the Kofi Annan – Dag Hammarskjold lectures. The KA – DH Lecture is an annual event in honour of the two former Secretary-Generals of the United Nations (Kofi Annan and Dag Hammarskjold). This year’s lecture will focus on the topic “Preventing armed conflict: identifying and mitigating risks”. The Speaker will be Mr. Adama Dieng, Special Adviser to the UN Secretary-General on the Prevention of Genocide and the event will be Chaired by Her Excellency Christine Evans – Klock, UN Resident Coordinator in Ghana.

A Senegalese jurist, Adama Dieng became the first lawyer from the global south to lead the Geneva-based International Commission of Jurists (1990-2000) before joining the United Nations as Assistant Secretary-General and Registrar of the International Criminal Tribunal for Rwanda (2001-2012).

As this year’s Kofi Annan – Dag Hammarskjöld lecturer Mr Dieng brings years of experience having written extensively on international law, international criminal justice, rule of law, human rights and democracy. He is well known as the driving force behind the Protocol establishing the African Court on Human and Peoples Rights. He is currently Honorary Chair of the Washington and Seattle based World Justice Project.

Dag Hammarskjöld Foundation asked Mr Dieng 5 short questions on his work before his lecture on October 3 in Accra.

1. What is the topic of your lecture?

My lecture will focus on the prevention of armed conflict, especially early prevention. I believe that violent conflicts, which often serve as a precursor to the crimes of genocide, war crimes and crimes against humanity are processes. These crimes do not happen overnight rather there are early warning signs that a potential conflict is in the offing. When the warning signs are detected, it is possible to take early preventative actions.  Prevention is an ongoing process which entails constructive management of diversity, respect for the rule of law, protection of fundamental rights and freedoms and commitment to strong and accountable institutions that are responsive to the needs and aspiration of citizens in a society concerned.

2. Do you have any personal reflections on Annan and Hammarskjöld and who they are to you?

When we think of Dag Hammarskjold and of Kofi Annan we are reflecting on two of the powerful   examples of unquestionable leadership in advancing the cause of ‘We the Peoples’ underpinned by the United Nations Charter. Both served as Secretary-Generals of the United Nations in two very different eras, yet they worked to advance the needs of one world with integrity and a vision for the peaceful and prosperous future. With deepest conviction and belief in humanity, both possessed the necessary idealism to advance the cause of peace against all odds, while recognising limitations to their aspirations. Their ability to navigate complex and challenging political environments with tact and diplomatic skill, is something that will be cherished for generations to come. I particularly appreciate their capacity to advance towards the world they envisioned while operating with realism within the boundaries of their real present world.

3. What are some of the cases of prevention you are focusing on right now?

Recently I had an opportunity of providing an overview of concerns from the perspective of my mandate to the Human Rights Council in Geneva. Many of those concerns I raised relate to cases in which prevention often comes late. Of course, while it is never too late to prevent further atrocity crimes, the inaction of the international community has already failed the people of Syria, Myanmar, Yemen and South Sudan, to name a few. Some of these failures could have been prevented had the international community responded to the alerts that came from a number of sources, including from some of us at the United Nations. Besides these obvious, clear cases, I am paying attention to other, less critical but equally concerning dynamics. The dramatic increase in racism and xenophobia in Europe and North America or the increasing vulnerability of indigenous populations in different parts of the world, for instance, are something that we need to pay attention to as a matter of urgency.

4. What has been your most difficult task as Special Adviser on the Prevention of Genocide?

Undoubtedly many States still express discomfort when I approach them under the umbrella of my mandate. No matter how grave the extent of human rights violations in a given conflict or a given State, many still question why I should be paying attention to those situations. States tend to look more at the word ‘genocide’ than at the word ‘prevention’. The same is true, I am afraid, for some States that are in a position to respond to such situations but fail to do so. I have very much appreciated the opportunity of briefing the Security Council on a number of occasions, but some Council members still question why I should brief them on situations that I deem at risk. This remains a challenge.

I strongly believe that ‘prevention is the response’ and that the case for prevention has been made. The time has come to move forward and to operationalise this commitment. The United Nations is doing its part. Ongoing reform efforts aim at making our Organisation more suited to work and succeed in preventing conflict, human rights violations and atrocity crimes. We need to continue this work but we also need to encourage Member States to maximise the opportunities for prevention in their work in the inter-governmental organs of the United Nations. The Security Council, the General Assembly and the Human Rights Council can do more to prevent atrocity crimes. Regional and sub-regional organisations, each with their distinct decision-making arrangements and comparative advantage, can and should do more. Addressing these structural challenges and possibilities can help us advance prevention in a big and meaningful way. I believe that this should be our collective focus in the months and years to come.

Photo caption for upper: Adama Dieng, Special Advisor on the Prevention of Genocide of the United Nations during the press conference. 10 March 2014. UN Photo / Jean-Marc Ferré